Posted on January 1, 2018 by stuartelden

Over the Christmas and New Year period I was in Tenerife, for a holiday and some cycling. Unfortunately in the second half of the time there I was unwell, and had dizziness and balance problems, so did no further cycling. But in the first half of the time I did a few shorter rides and the big climb I’d been planning to do. This was to ride to the Mount Teide observatories at Izaña. The road reaches 2330 metres above sea level, which is the highest I’ve been on a bike, and the climb began from Caletillas on the north-east coast. It was tough.

On a previous trip I’d cycled up to the Teide plateau from the southwest of the island. That was very hard, but I think this was tougher. There is a ridge running roughly south-west to north-east from the plateau, and the first part of the challenge was to get onto that. The climb from Afaro to Los Loros is itself an ‘hors catégorie’ climb, and it’s only 11 miles of the total. From there it was about 8 miles to the observatory, marginally easier, but with some drops that you have to reclimb. It was 55 mile ride in total, and I came down the way I went up. If you’re interested, there is a animated map video from relive.cc 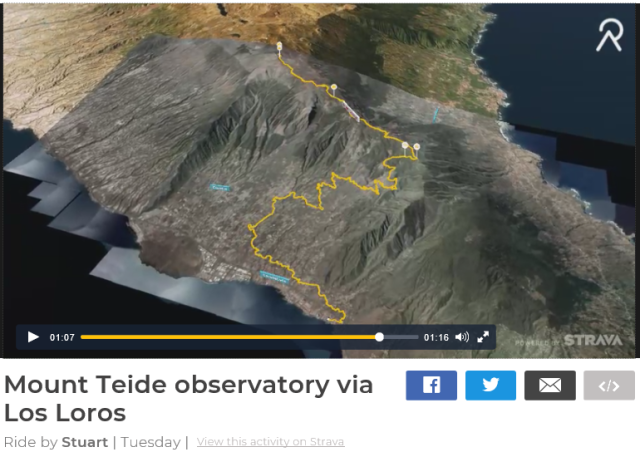 The Mount Teide volcano itself is much higher, but there is a cable car to the top. The highest point on the paved road can only be reached by descending from where I was into the crater, and then climbing again. But I think it’s only 20 metres higher than the point I reached, and would have added about 20 miles onto the ride. Another time, perhaps.

This entry was posted in Cycling, Travel, Uncategorized. Bookmark the permalink.