Faut-il brûler… Sade, Dumézil, Heidegger, Kafka – a question on the use of a trope [updated] 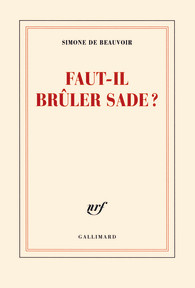 I had previously thought that the use of the expression ‘Faut-il brûler… ?’ – ‘must we burn.. ?’ someone or something was due to Simone de Beauvoir. Her text Faut-il brûler Sade? first appeared in Les temps modernes in 1951 and 1952, and was then collected in Privilèges in 1955 and later reprinted with the essay title as that of the book.

There is a book by Didier Eribon called Faut-il brûler Dumézil? (1992) and an essay by Thomas Sheehan entitled ‘L’affaire Faye: Faut-il brûler Heidegger?‘ from 2016. I’m sure there are many more.

I’m uncomfortable with the use of the term ‘burn’, given the legacy of actual book burnings, though that is presumably part of the point of its use. But today I realised that Maurice Merleau-Ponty wrote a short piece entitled ‘Faut-il brûler Kafka’, which was first published in Action in 1946. It is collected in his Parcours 1935-1951. Merleau-Ponty was one of the editors of Les temps modernes, so de Beauvoir’s title was surely a nod towards this. [Just to clarify, the title/question was possibly that of the journal, to which Merleau-Ponty and others were responding.]

Was the phrase used before Merleau-Ponty in this sense? I’m interested in any examples from before him, or between him and de Beauvoir, but specifically in relation to an author whose works are debatable, and I think all in these examples it is where it is their right-wing or reactionary politics is at stake – a reversal of from the book burnings of the 1930s and 1940s.

Update: Cesare Birignani writes about this, which I share with permission:

Dear Stuart,
The “faut-il brûler” trope may be an echo of an “enquête” launched in 1920 by “L’Esprit nouveau,” the journal founded by the painter Amédée Ozenfant and Charles-Edouard Jeanneret, who began there to use the pseudonym Le Corbusier. The journal asked its readers a deadpan, Dadaist question: “Doit-on brûler le Louvre?” (no. 2, Nov. 1920). Responses came from at least three dozen readers (a mix of artists, gallerists, art critics, and writers) and were published with the title “Faut-il brûler le Louvre?” (nos. 6 and 8, March and May 1921). (The “enquête” is attached; the full journal is at http://arti.sba.uniroma3.it/esprit/)
This is probably a bit of a stretch, but there may be a “L’Esprit nouveau”-“Les Temps modernes” connection through Jean Paulhan, who knew Le Corbusier since at least 1938 (and possibly much earlier) and in July 1945 went on a trip to Switzerland with Le Corbusier and Jean Dubuffet.
All the best,
Cesare Birignani

As it is the case most of the time in our correspondence, I can only contribute marginally. In your last mail you recommended Tiphaine Samoyault’s biography of Roland Barthes – thanks a lot! – & I’m currently reading it (German edition, Berlin 2015: Suhrkamp). In chapter 11 (title: “Literatur”, subchapter: “Barthes erklärt sich”) Samoyault writes about the Racine debate between Barthes & Picard. In this context, I’ve just read: “Das Buch [Critique et Vérité] erscheint im März, knapp sechs Monate nach dem von Picard, mit einer werbewirksamen Banderole: ‘Muss man Barthes verbrennen?’ (p. 508, emphasis added). This is 20 years after Merlau-Ponty’s use of the trope & what might be interesting is that the use here has become (self)ironic & a mere device for selling books.

And he follows up:

In the French case, book burnings seem to have a special political impact since the Revolution. So, perhaps the use of the trope after 1945 is not so much to be seen in reaction to right-wing book burnings in the first half of the 20th century but rather in the historical continuity of left politics & rhetoric in France?

1 Response to Faut-il brûler… Sade, Dumézil, Heidegger, Kafka – a question on the use of a trope [updated]