On Sunday I took a couple of hours to explore the fairly new Jerusalem light rail. It opened in late 2011 and when I was last here in 2009 it was still under construction. I’m staying near Damascus Gate, and there is a station right across the road. There is only one line so far (more are planned) which runs from Mount Herzl in the west to Heil Ha’Avir (Air Force Street) in the north east. The most interesting bit architecturally is Chords bridge just past Central Station, but it has also made Jaffa Road semi-pedestrianized. 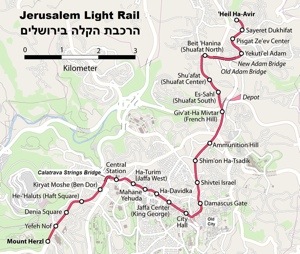 Politically it was heavily contested because from Damascus Gate northwards it is built in East Jerusalem, captured by Israel from Jordan in 1967 and annexed since 1980 (the UN has ruled this illegal). It is part of a wider project of road and infrastructure building to unify the city, but it also links a number of Israeli settlements in the east to the historic and cultural centre. In Beit Hanina especially it runs close to the route of the separation wall. Along with so much else here it raises a host of thought-provoking urban-political geographical questions.

This entry was posted in Boundaries, Politics, Territory, Travel, urban/urbanisation. Bookmark the permalink.