I’ve updated the list of Geographers, sociologists, philosophers etc. on covid-19 on this site. The most recent addition is an essay by Matthew Hannah with Jan Simon Hutta and Christoph Schemann, Thinking Corona measures with Foucault (University of Bayreuth)

I will add more links as I’m told about them, but am no longer trying to keep on top of links – there are just too many pieces to add them all. Please use comments on the page (now enabled) wherever possible, and provide links please – rather than on Facebook or Twitter. 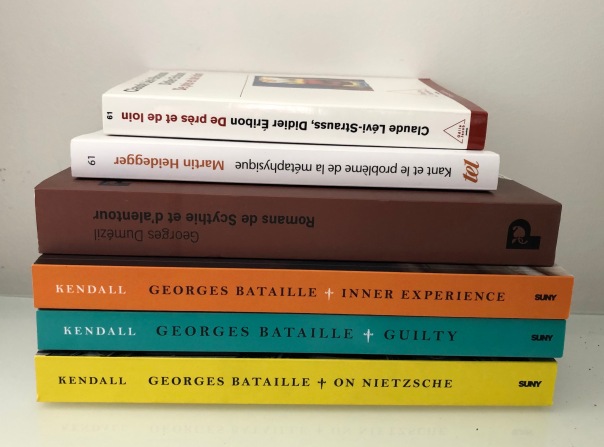 A few things, some ordered before the lockdown began and some since, that will keep me busy for a while. While I have the Heidegger book in German and English, this was an early French translation, and important in terms of the take-up of his ideas and the translation of key terms.

– is there a comprehensive list anywhere of the writings by/attributed to Bataille which are not included in the Oeuvres complètes? I know of Une liberté souveraine, for example, and letters, and texts from some of the early journals he edited in different places (Le Collège de Sociologie, L’apprenti sorcier, etc.) . But I wonder if there is a comprehensive list somewhere?

– and is there a list of English translations, tallied to the Oeuvres complètes, and including texts in other places? It’s fairly easy for major works, but harder for essays – there are at least two translations of some texts, and others which I don’t think have been translated. Again, just wondering if there is a single place where this has been collated.

I’m aware of the lists on Wikipedia, on popsubculture, and the partial biographies in collections like Visions of Excess, Essential Writings, The Bataille Reader, The Absence of Myth: Writings on Surrealism, and so on. There are partial bibliographies in some of the secondary books I have on Bataille, but nothing that seems comprehensive. Anyone help with this?

Biopolitics in the Time of Coronavirus

Daniele Lorenzini on Biopolitics in the Time of Coronavirus

In a recent blog post, Joshua Clover rightly notices the swift emergence of a new panoply of “genres of the quarantine.” It should not come as a surprise that one of them centers on Michel Foucault’s notion of biopolitics, asking whether or not it is still appropriate to describe the situation that we are currently experiencing. Neither should it come as a surprise that, in virtually all of the contributions that make use of the concept of biopolitics to address the current coronavirus pandemic, the same bunch of rather vague ideas are mentioned over and over again, while other—no doubt more interesting—Foucauldian insights tend to be ignored. In what follows, I discuss two of these insights, and I conclude with some methodological remarks on the issue of what it may mean to “respond” to the current “crisis.”

The “Blackmail” of Biopolitics

The first point that I would… 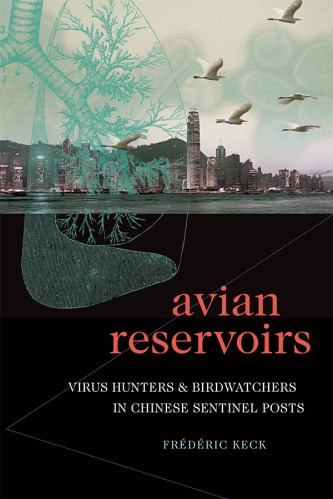 I’d missed this when it came out early this year, so thanks to Sebastien Nobert for the link. Clearly written some time ago, but especially timely at the moment.

After experiencing the SARS outbreak in 2003, Hong Kong, Singapore, and Taiwan all invested in various techniques to mitigate future pandemics involving myriad cross-species interactions between humans and birds. In some locations microbiologists allied with veterinarians and birdwatchers to follow the mutations of flu viruses in birds and humans and create preparedness strategies, while in others, public health officials worked toward preventing pandemics by killing thousands of birds. In Avian Reservoirs Frédéric Keck offers a comparative analysis of these responses, tracing how the anticipation of bird flu pandemics has changed relations between birds and humans in China. Drawing on anthropological theory and ethnographic fieldwork, Keck demonstrates that varied strategies dealing with the threat of pandemics—stockpiling vaccines and samples in Taiwan, simulating pandemics in Singapore, and monitoring viruses and disease vectors in Hong Kong—reflect local geopolitical relations to mainland China. In outlining how interactions among pathogens, birds, and humans shape the way people imagine future pandemics, Keck illuminates how interspecies relations are crucial for protecting against such threats.

“In this ethnography of the prevention of bird flu pandemics in Asia, Frédéric Keck dazzlingly interweaves perspectives from the anthropology of sciences and institutions, an account of the modernization of methods of biopower, and a fine-grained analysis of relations between endangered humans and nonhumans in order to show how common values evolve out of their mutual vulnerabilities. A crucial contribution to the reformulation of political rules for the coexistence between different forms of life.” — Philippe Descola, Collège de France

“This is a delicious book, fun to read and full of bright sparks of insight. Frédéric Keck compares microbiologists to hunters; he mixes and matches his ontologies in relation to particular scientific practices. The exuberance of comparison makes the experiment work. I find it stimulating and good to think with.” — Anna Tsing, coeditor of Feral Atlas: The More-Than-Human Anthropocene

Achille Mbembe, Out of the Dark Night: Essays on Decolonization – Columbia UP, August 2020 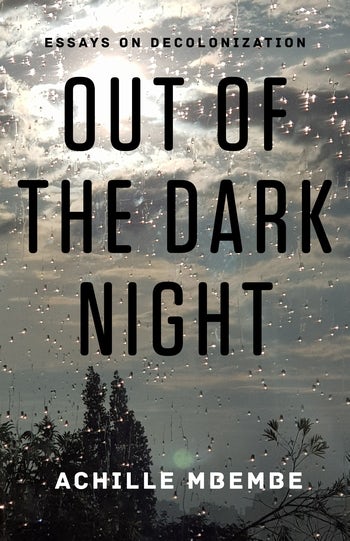 Good to see that an English translation of Achille Mbembe, Sortir de la grande nuit is forthcoming in August 2020 from Columbia University Press – Out of the Dark Night: Essays on Decolonization

Achille Mbembe is one of the world’s most profound critics of colonialism and its consequences, a major figure in the emergence of a new wave of French critical theory. His writings examine the complexities of decolonization for African subjectivities and the possibilities emerging in its wake. In Out of the Great Darkness, he offers a rich analysis of the paradoxes of the postcolonial moment that points toward new liberatory models of community and humanity.

In a nuanced consideration of the African experience, Mbembe makes sweeping interventions into debates about citizenship, identity, democracy, and modernity. He eruditely ranges across European and African thought to provide a powerful assessment of common ways of writing and thinking about Africa. Mbembe criticizes the blinders of European intellectuals, analyzing France’s failure to heed postcolonial critiques of ongoing exclusions masked by pretenses of universalism. He develops a new reading of African modernity that further develops the notion of Afropolitanism, a novel way of being in the world that has arisen in decolonized Africa in the midst of both destruction and the birth of new societies, making the case for South Africa as its laboratory. Out of the Great Darkness reconstructs critical theory’s historical and philosophical framework for understanding colonial and postcolonial events and expands our sense of the futures made possible by decolonization.

Derek Gregory, Under Afghan Skies – Prologue and Part I

Derek Gregory’s Geographical Imaginations blog has been quiet for a while, but he’s just posted two parts of his extended essay, “Under Afghan Skies” – Prologue and Part I

In what seems like another lifetime, although it was only last month, I spoke at a wonderful conference on “The Aesthetics of Drone Warfare“, organised by Beryl Pong and her team at the University of Sheffield.

I gave a new version of my research on the Uruzgan air strike that has preoccupied so many critics of drone warfare.  You can find earlier versions here and here, and I discussed the aftermath of the strike and the fate of the casualties in an essay called “Eyes in the Sky, Bodies on the Ground” which you can find under the DOWNLOADS tab [the original appeared in Critical Studies on Security 6 (2018) 347-358]. The Sheffield talk will eventually be online, though like so much else in these difficult times I’m sure that’s been delayed.  I’ve also given developing versions of the argument at several other conferences, under various titles; ‘developing’ because I haven’t been able to let it go.  Each time I dive back into the archival materials I seem to find something new – that’s in the nature of archival research, I think – but I’ve now been able to work up what is, I hope, the near-final written version.

This will be the last Part (I had hoped ‘chapter’, but it’s too long for that) of my new book, Reach from the Sky, which is intended to be both a geography and a genealogy of aerial violence.  Over the next several weeks I’ll be posting the essay here in serial form – interspersed, I suspect, with other notices: I’ve decided to return to blogging at something like my old pace – and I would be truly grateful for any comments, questions or suggestions (at derek.gregory@ubc.ca).

Mary Floyd-Wilson and Garrett A. Sullivan (eds.), Geographies of Embodiment in Early Modern England – OUP, May 2020

Geographies of Embodiment in Early Modern England gathers essays from prominent scholars of English Renaissance literature and history who have made substantial contributions to the study of early modern embodiment, historical phenomenology, affect, cognition, memory, and natural philosophy. It provides new interpretations of the geographic dimensions of early modern embodiment, emphasizing the transactional and dynamic aspects of the relationship between body and world.

The geographies of embodiment encompass both cognitive processes and cosmic environments, and inner emotional states as well as affective landscapes. Rather than always being territorialized onto individual bodies, ideas about early modern embodiment are varied both in their scope and in terms of their representation. Reflecting this variety, this volume offers up a range of inquiries into how early modern writers accounted for the exchanges between the microcosm and macrocosm. It engages with Gail Kern Paster’s groundbreaking scholarship on embodiment, humoralism, the passions, and historical phenomenology throughout, and offers new readings of Edmund Spenser, William Shakespeare, Thomas Nashe, John Milton, and others. Contributions consider the epistemiologies of navigation and cartography, the significance of geohumoralism, the ethics of self-mastery, theories of early modern cosmology, the construction of place memory, and perceptions of an animate spirit world.

In search of an Arendt (mis)quotation

Hannah Arendt’s work, especially The Origins of Totalitarianism, has been back in the news the last few years for obvious reasons. One quotation in particular seems to be especially pertinent. It reads:

“One of the greatest advantages of the totalitarian elites of the twenties and thirties was to turn any statement of fact into a question of motive”.

The quotation is widespread on the internet – a quick google search brings up lots of places where it is quoted, sometimes referenced to The Origins of Totalitarianism. Sometimes it is even turned into a motivational image:

But does the quotation really come from Arendt? I wasn’t sure. The references are often vague, and none I could find supplied a page number. The best I could find was a piece in The New Yorker from 1999 that made this claim, but as a characterisation of her argument, rather than a direct quotation.

Eventually I found what I strongly suspect is the passage in The Origins of Totalitarism:

“The elite is not composed of ideologists; its members’ whole education is aimed at abolishing their capacity for distinguishing between truth and falsehood, between reality and fiction. Their superiority consists in their ability immediately to dissolve every statement of fact into a declaration of purpose” (Penguin complete edition, Chapter 11, p. 503; Harvest edition, p. 385).

It’s clearly close, and close enough, I think, that it is indeed the basis for the quotation in circulation. (I understand Arendt wrote the book in English, so it’s not a question of translation.) But it shows that Arendt was saying something a little distinct from the general way in which she is being taken. And it also shows how a characterisation of an argument can be taken as a direct quotation, and then circulate widely, without it being checked back to the original source.

Anyone shed any further light on this?