My book on Georges Canguilhem for Polity’s Key Contemporary Thinkers series was published in early 2019 – all details here.

It has been reviewed by David Beer at The Sociological Review; Steve Hanson at Manchester Review of Books and by Codrin Tăut at Foucault Studies (all open access).

This work was directly related to the research I did for The Early Foucault, since Canguilhem was a key figure in Foucault’s intellectual formation, most obviously through his role as rapporteur for Foucault’s thesis on the history of madness. Unlike the Foucault work, I didn’t make detailed updates on the research and writing process, but there are two posts below which explain the genesis of the project and give some further detail. 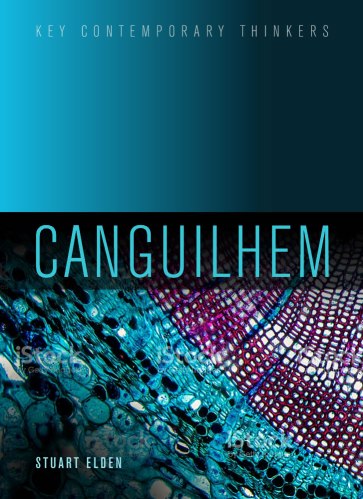 Georges Canguilhem (1904-1995) was an influential historian and philosopher of science, as renowned for his teaching as for his writings. He is best known for his book The Normal and the Pathological, originally his doctoral thesis in medicine, but he also wrote a thesis in philosophy on the concept of the reflex, supervised by Gaston Bachelard. He was the sponsor of Michel Foucault’s doctoral thesis on madness. However, his work extends far beyond what is suggested by his association with these thinkers. Canguilhem also produced a series of important works on the natural sciences, including studies of evolution, psychology, vitalism and mechanism, experimentation, monstrosity and disease.

Stuart Elden discusses the whole of this important thinker’s complex work, including recently rediscovered texts and archival materials. Canguilhem always approached questions historically, examining how it was that we came to a significant moment in time, outlining tensions, detours and paths not taken. The first comprehensive study in English, this book is a crucial guide for those coming to terms with Canguilhem’s important contributions, and will appeal to researchers and students from a range of fields.

‘The patience, clarity, and erudition we expect of Stuart Elden’s books are on full display in this exceptional work. More than a simple Introduction, Canguilhem enables readers to see the outlines, stakes, and details of the works of an important thinker.’
John Protevi, Louisiana State University

‘This impressive and meticulously researched volume which includes a wealth of references to archival material provides the first comprehensive introduction in English to a figure recognised as a seminal influence by post War French thinkers, including Foucault and Althusser.’
Clare O’Farrell, Queensland University of Technology