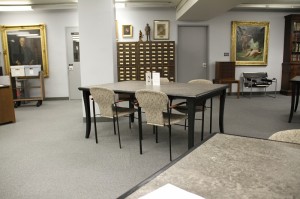 I have now finished working through all the papers in Sylvère Lotringer’s Semiotext(e) archive in the Fales Library at New York University which have a relation to this project.

In among a lot of things that were of little interest, a few things are worth noting. The flyers, publicity materials, press reports and attendance list for the 1975 Schizo-Culture are historically intriguing. Artists, writers and musicians were there as well as theorists and activists – John Cage and William Burroughs are the most famous. One marginal note to the ‘tentative’ musician list made me laugh. Next to Keith Jarrett’s name is written in pencil: “musician, improvisation, but more formal than Charlemagne” [see, though comments below, which suggest this may instead be a reference to the artist Charlemagne Palestine]. While excellent, the recent MIT Press volumes on the event and the book maybe could have included more reproductions of these documents.

Also interesting was the material for the Michel Foucault philosophe conference in France in 1988, which Lotringer was invited to attend. The conference had a concert following, conducted by Pierre Boulez by the Ensemble intercontemporain with a programme of Stockhausen, Messiaen, Boulez, Webern, Berio, and Schoenberg.

There are some translations in these files which were never published – “Religious deviations and medical knowledge” – which later appeared, in a different translation in Religion and Culture; some of the early pages of Foucault and Arlette Farge’s Le désordre des familles – which is now finally coming out in English translation, but I’m sure that too is a different translation; and a plan to translate Foucault’s introduction to Ludwig Binswanger’s Dream and Existence for an unpublished theme issue of Semiotext(e) on panic – also long available, but this project preceded it. Also a  different translation of Deleuze’s essay on Foucault as an archivist (at least different from the one I know). I didn’t find any other translations which haven’t appeared elsewhere, but did find plenty of copies of material that was translated, some in original languages other than French.

There is some correspondence relating to the Foucault: Live book, including letters from annoyed interviewers because of a misattribution in the 1989 edition, and one from Didier Eribon asking Lotringer for an interview for the biography he is writing; John Rajchman’s paper from the book’s launch event; notes from one of Foucault’s NYU lectures in 1980 (largely transcribed as ‘Sexuality and Solitude’); large folders of notes by Lotringer on Foucault’s books; preparatory materials for The Politics of Truth; pieces by Guattari and reviews of books on Foucault. Sometimes an interesting letter would be in the middle of a pile of photocopies.

I found one typed page in a couple of different folders. It’s about recordings of the Semiotext(e) conference, but the objects it refers to are sadly nowhere to be found:

Felix afternoon speech, side A (TDK) Side B is Foucault speech

Foucault questions, interruptions, side A (TDK) End of side A is panel, beginning of side B is panel. Side B includes [John] Cage.

Deleuze, rhizome, on one.

There is also what appears to be Guattari’s notes for his lecture at the conference – blue ink on small paper. I don’t know Guattari’s handwriting, so I can’t be sure. It’s a lot neater than Foucault’s though, and not Lotringer’s hand.

I have received two opinions of the original book that lead me to say we will be unable to consider publication of the translation here. Both advisers, although conscious of the importance of Deleuze himself, felt that the work on Nietzsche was not worth doing in and of itself; they felt it was a much less exciting work than the Anti-Oedipe and that it would neither be particularly useful nor enjoy a wide sale. In the light of those remarks, therefore, I don’t feel justified in pursuing the matter further here, and I am returning herewith the sample of the translation you furnished.

The book finally appeared, with a different translator, in 1983… with Columbia University Press.

As this indicates, some of this is a bit of a mess, and the archivist’s designation of the folders – perhaps as a result of how Lotringer left them? – is a little non-specific. I’m sure there is more interesting stuff in the archive in other folders and boxes, but I’ve now been through every folder which has an obvious link to Foucault.

You can read more about these books, along with links to previous updates, here.

3 Responses to Foucault books: update 23 – working with the Semiotext(e) archive