Most people will have noticed, especially those in the UK, that last weekend was a celebration of the work of Shakespeare – 400 years since his death (and 452 since his birth if the dates do indeed coincide). Many thanks for all those who have sent me links to things commemorating the anniversary – too many to link to all, but I’ve appreciated them.

Although it’s hardly unusual for me to see one or more Shakespeare plays in a week – between the Coventry and London dual life I currently have, I am 30 minutes drive from Stratford-upon-Avon and less than that walking from the Globe – I was pleased to see two productions last week. One was the the Globe-to-Globe Hamlet – a touring production that was played in 197 countries over the last two years. and the second was Kings of War at the Barbican. I may say a little about the Hamlet production in a subsequent post.

Kings of War is an epic production – condensing Henry V, the three parts of Henry VI, and Richard III into a whole (with a little bit of Henry IV, Part Two in there too). Directed by Ivo van Hove, and performed by the Tonelgroep Amsterdam, it’s four and a half hours long, and it’s in Dutch, with English surtitles. A trailer is below:

The first half is Henry V, and some of Henry VI. The second half has some more parts from the Henry VI plays, and Richard III. I thought Henry V was really good, and while there were substantial cuts, the bunker-setting and obvious nods to more recent wars of dubious legality worked well. I don’t know Henry VI as well as I do the other two, but it suffered most from cutting – no Joan of Arc, Talbot or Jack Cade. In part the performances of the leads shaped the reaction I had, and I think I preferred Alex Waldmann in Trevor Nunn’s The Wars of the Roses (using the old Peter Hall/John Barton script), which I saw last year, to Eelco Smits.

Richard III was really good though, with Hans Kesting in the lead role, and as in The Wars of the Roses it really does help to see it follow Henry VI, Part Three, rather than as a separate play. Kesting had a large facial birthmark, and didn’t so much limp as walk like a man who had just shat himself. His calling world-leaders when he became king was a great, non-shakespearean, interlude. The absence of a horse was resolved in a very odd way, one which I’m not sure worked, but was certainly different. 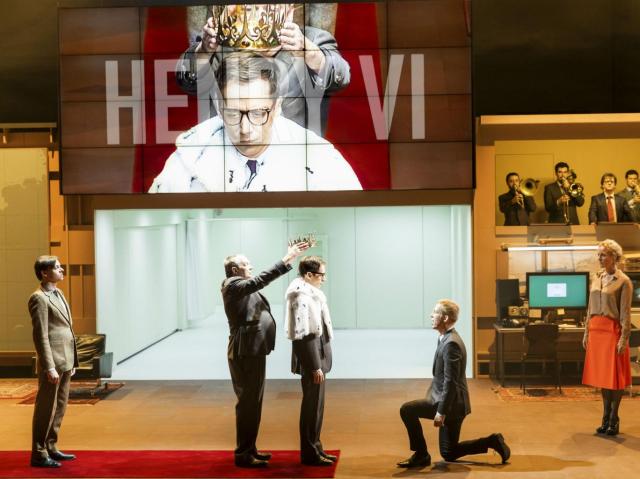 All the plays made very creative use of the space, both physical and virtual, with a large video screen showing some off-stage action – some live-filmed in corridors leading off the set, and some pre-recorded. This made for a lot to keep an eye on – the main, wide stage, the screen, the surtitles above, and the movement on and off, some shown on the screen. Sometimes the camera came on stage, and you had two angles of a character at the same time – highly choreographed and much more immersive than a simple staging.

A lot to take in – both visually and textually. At present, the only one of these plays I plan to discuss in the projected Shakespeare book is Henry V, but I may go back, again, to Henry VI. It’s an epic evening, and I’m sorry the run ends on 1 May, as I’d quite like to see it again.

Update: a much fuller and better review is at The Bardathon.

This entry was posted in Shakespearean Territories, Uncategorized, William Shakespeare. Bookmark the permalink.