A geopolitical Cymbeline at the RSC – ancient Britain, Rome and the EU referendum 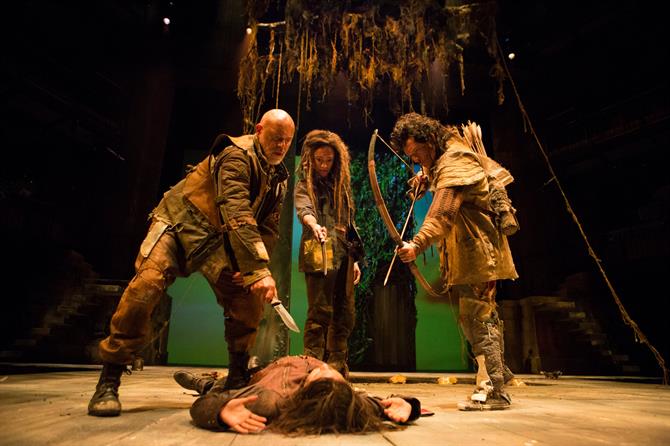 The current production of Cymbeline at the RSC is explicitly geopolitical. In their publicity they make the point that Cymbeline is ‘rarely performed’, which is generally true, though there was a production at the Globe’s indoor theatre this past winter, and the play is also on the main Globe stage this summer, reimagined as Imogen.

There are several interesting geographical themes in the play, from the contrast between city and country, to the relation between Britain and the Roman Empire. Cymbeline is King of Britain, and at the time of Augustus Caesar there is a dispute about whether Britain is paying a required tribute. The historical record is incomplete, and Shakespeare incorporated elements from diverse sources. But in topic at least the play therefore bridges the topics of Shakespeare’s historical plays – ancient Rome and English or British kings. I had sketched out a section on Cymbeline for my Shakespeare project, though wasn’t entirely sure what, if anything, to do with it.

In this production, Britain is reimagined as a kind of post-apocalyptic wasteland, strewn with rubbish and graffiti, with a tree stump enclosed in a glass box at the centre of the stage. Characters are in patchwork clothes and somewhat drab and dishevelled. Rome, in contrast, is multi-colour and multi-cultural. In an interesting change to the text, French, Italian and Latin is spoken, with surtitles projected onto one of the backdrops. Wales is more rural and has a sense of life that Lud’s town lacks, though a different sense to that of Rome. (The multi-ethnic cast cut across these three locations – they don’t group cast members in that way.) Perhaps the most obvious additional change is that we have a Queen Cymbeline, with the text’s wicked Queen now a devious Duke. Additionally, one of the lost children, kidnapped and brought up in rural Wales, is a daughter. The elder Guiderius is thus Guilderia, raised by the banished lord Belarius as Polydore. She is the legitimate heir to Cymbeline. These changes challenged some of the text’s language in interesting ways.

The relation of Britain to Rome is implicitly here the relation between Britain and Europe, and the play’s programme makes this explicit. While the programme tries to make this a balanced projection, the play of course doesn’t treat the two sides equally. While the Roman invasion is repulsed by heroic Britons, and Rome is clearly corrupt (the lecherous Iachimo), the characters who express the clearest anti-Roman sentiments are either idiots or devious. It is Cloten who describes Britain as ‘a world by itself, and we will nothing pay/For wearing our own noses’; the scheming Queen (or the Duke here) who says it is like ‘Neptune’s park, ribbed and paled in/With oaks unscalable and roaring waters’. It’s hardly John of Gaunt in Richard II, but there is much to say about this image. And it is Cymbeline, while deceived by his wife (her husband, here), who says that Britain will not endure the Roman ‘yoke’ and assert its own sovereignty. Boris Johnson as Cloten and Michael Gove as the King or Queen? On the other hand, the most positively portrayed characters – Innogen, the two lost sons, Belarius and, at the end, Cymbeline – are not passive dupes of Rome, but also realistic about Britain’s relation to the neighbouring continent.

In Shakespeare’s time England was, of course, beginning an empire of its own, beginning with the contiguous Wales and Scotland. The break with the Roman church was very recent, and as Willy Maley has noted, the 1533 Act that freed England from their authority of Rome did so by asserting it as an empire itself. Britain’s own imperial ambitions didn’t, for me, come through here. But the wider geopolitical setting – the two provinces challenging Rome, the “Roman legions, all from Gallia drawn” that invade Britain – were made very clear through the use of projected animated maps. If perhaps going too much in the direction of a modern political geography this was at least in keeping with the production’s setting, and it made me think more on the role the Pannonians and Dalmatians play.

I doubt the production will do much to change anyone’s views about the upcoming referendum, but it was a striking contemporary parallel. The production continues through the summer and into the autumn, with a live-to-cinema broadcast on 28 September.

2 Responses to A geopolitical Cymbeline at the RSC – ancient Britain, Rome and the EU referendum