The Early Foucault update 4: Merleau-Ponty, Canguilhem, a week in the archive and a book contract… 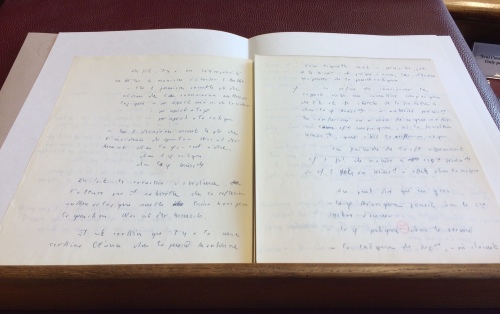 The past few weeks have felt like I am running a few different research careers in parallel, with ongoing things around Lefebvre, Shakespeare and the terrain work. This has meant dealing with publishers, grant bodies, and writing projects, as well as giving a talk at the British Library on the theme of power, territory and borders; and a public lecture at Durham on the terrain project. The next talk on terrain will be the London Review of International Law annual lecture on Thursday – February 23rd.

Nonetheless, as time has allowed, I’ve also done some work on Foucault, including beginning work with some of Maurice Merleau-Ponty’s lecture courses at the Sorbonne, which we know that Foucault attended. While based on student notes, they were initially edited by Merleau-Ponty himself. There are now multiple editions of these lectures, individually or collectively, in French, and English translations of several individually. These initially confused me as to what was what, and why there were duplicate courses and translations published. The definition edition is Psychologie et pédagogie de l’enfant: Cours de Sorbonne 1949-1952; translated as Child Psychology and Pedagogy: The Sorbonne Lectures 1949-1952. There are also some other lectures from Lyon and some radio addresses from around this time, which I’ve also been looking at. Once Merleau-Ponty takes up his chair at the Collège de France in 1952, I’m less sure that Foucault followed his courses. Once Foucault goes to Sweden it’s unlikely (though he was regularly back in Paris), and Merleau-Ponty dies in 1961, just before Foucault defends his thesis. But I think that digging into Merleau-Ponty’s work will be useful – there is one early work which looks very important.

I also have been doing some further reading of Georges Canguilhem’s work, which I knew in part before, and some of Georges Dumézil’s writings, which I knew less about. Both of these are writers who Foucault said were important to his early work. Canguilhem has proved to be especially interesting and time consuming, and while I had some of his works in English and French already, I’ve begun building up a more complete collection. I’m especially interested in the project of his Oeuvres complètes, of which two volumes are currently published.

Last week was reading week at Warwick, so I’ve also been back in Paris to do some more work with the manuscripts at the Bibliothèque Nationale. This visit I spent some time with boxes of material relating directly to the 1950s, at the Richelieu site. I found a lot of surprises in these, though as ever the cataloguing is a bit erratic and things are rather jumbled. There are materials which clearly relate to much later concerns in here or, at least, material which informed later concerns. As I’ve said before, Foucault doesn’t date his notes, so it’s really hard to be certain about anything. But there are multiple clues to organization, from handwriting to type of paper, to the scrap paper he used, especially to group notes. There are notes taken in lectures mixed up with reading notes. Some of my favourite finds included lots of early notes on sexuality; loads of material on theatre and literature, including on Roussel and Flaubert; an almost complete typescript of the introduction to Kant’s Anthropology, tonnes of notes on Husserl; and what I was expecting to find – the extensive notes on Binswanger and other psychiatry. These were very detailed, and his reading really was wide-ranging. As well as the Binswanger introduction, Maladie mentale et personnalité and some short texts, we know that Foucault lectured on psychology at Lille and at the ENS. Lots of useful leads here for the research I’m doing.

If and when I eventually get to working on The Order of Things and The Archaeology of Knowledge, I’ll be sure to return to the references here, because Foucault read very extensively in analytic philosophy, literary theory, history of science, history of ideas and so on. As ever, I took extensive notes – over 16,000 words in four days. Often this was just building up a detailed inventory of what was here. I didn’t quite finish the boxes I’d ordered – two of them were divided into ‘a’ and ‘b’ boxes, so there was a lot more material than I expected. Once the archive closed I also made a couple of short evening visits to the Mitterand site to look at some Canguilhem texts which are hard to find in London, and of course did my usual tour of favourite bookshops. On the trip, I also read and wrote a review of Robert E. Lerner’s excellent Ernst Kantorowicz: A Life, which should be published very shortly.

My research on the early Foucault was presented to an audience for the first time when I gave a talk at the Institute of Historical Research in London, to their Philosophy of History seminar. The first half discussed Foucault’s Last Decade and Foucault: The Birth of Power and the general approach I’ve been taking to this work – textual, contextual, archival. The second half outlined some of the themes and questions I’m trying to examine with the early period. Much of this was, at this stage, necessarily provisional and more of a survey of issues rather than a thorough treatment, but I said something about Foucault’s role in the translations of Ludwig Binswanger and Viktor von Weizsäcker. I did record the talk and will likely share it at some point, but I plan to give versions of this at other places so it might be a little while before I do.

On my final day in the archive I received two reader reports on The Early Foucault proposal. These were extremely generous and supportive, and just yesterday the book was given the green light by Polity. So this project is now very much under way…

The previous updates on this project are here; and Foucault’s Last Decade and Foucault: The Birth of Power are now both available from Polity. Several Foucault research resources such as bibliographies, short translations, textual comparisons and so on are available here.

This entry was posted in Michel Foucault, The Early Foucault, Uncategorized. Bookmark the permalink.