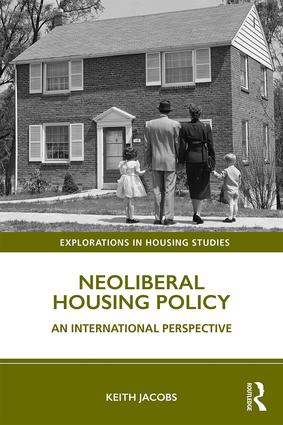 Neoliberal Housing Policy considers some of the most significant housing issues facing the West today, including the increasing commodification of housing; the political economy surrounding homeownership; the role of public housing; the problem of homelessness; the ways that housing accentuates social and economic inequality; and how suburban housing has transformed city life. The empirical focus of the book draws mainly from the US, UK and Australia, with examples to illustrate some of the most important features and trajectories of late capitalism, including the commodification of welfare provision and financialisation, while the examples from other nations serve to highlight the influence of housing policy on more regional- and place-specific processes.

The book shows that developments in housing provision are being shaped by global financial markets and the circuits of capital that transcend the borders of nation states. Whilst considerable differences within nation states exist, many government interventions to improve housing often fall short. Adopting a structuralist approach, the book provides a critical account of the way housing policy accentuates social and economic inequalities and identifies some of the significant convergences in policy across nations states, ultimately offering an explanation as to why so many ‘inequalities’ endure. It will be useful for anyone in professional housing management/social housing programs as well as planning, sociology (social policy), human geography, urban studies and housing studies programs.