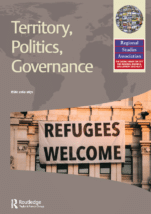 My article ‘Why should people interested in territory read Shakespeare?‘ is now published in Territory, Politics, Governance. It’s been available online for a while, but is now officially in an issue of the journal. If you don’t have institutional access, then the first 50 downloads are open access (here), but if that no longer works, please email me for a copy. The article is a summary of some of the themes of my book Shakespearean Territories (University of Chicago Press, 2018). My thanks to the editors of the journal, particularly Martin Jones for the invitation to write this piece.

This entry was posted in Shakespearean Territories, Territory, Uncategorized. Bookmark the permalink.