A bibliographical curiosity – ‘Michel Foucault’ and a thesis on penicillin “Sur l’emploi de la pénicilline par voie buccale”, Paris: Université Faculté de médecine, 1952 [?], 56 pages. The title would translate as ‘On the use of penicillin by mouth’.

Clark indicates that this is “Brief account of the therapeutic use of penicillin. (The National Union Catalog lists this as published in 1949.) It’s not clear why Clark thinks 1952 is a possible date.

Clearly this text is not by the well-known Michel Foucault, given we know that his training was in philosophy and psychology, not medicine. Later people working on Foucault, and building their own bibliographies, do not mention it. But while I’ve yet to find anyone who follows Clark, I’ve also not found anyone who explains why it is there.

It is also listed on p. 100. A copy of this thesis is at the Bibliothèque nationale. 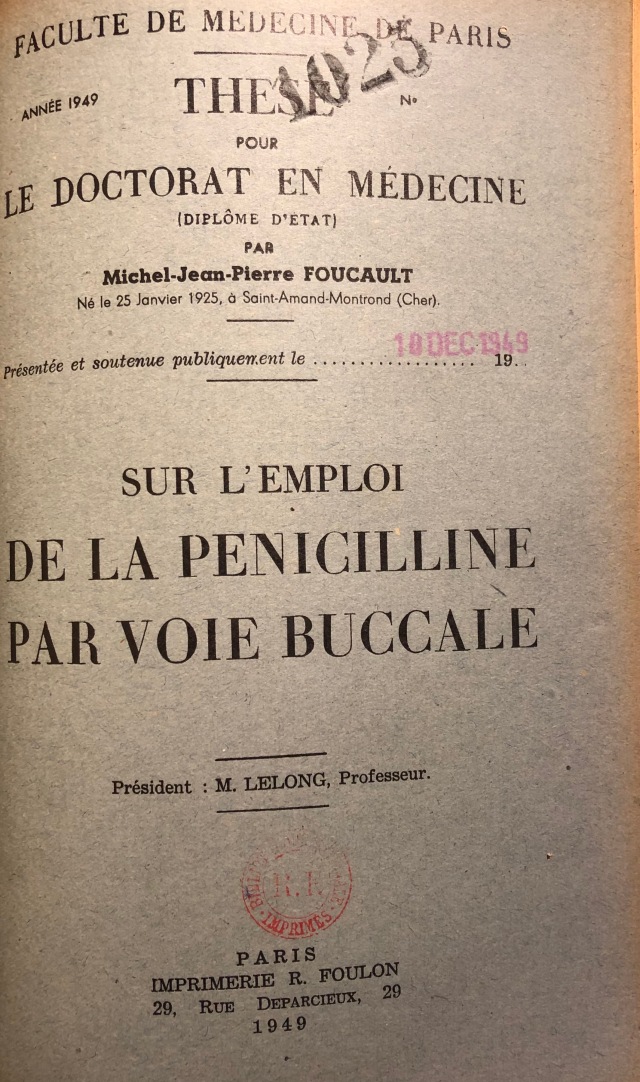 The famous Michel Foucault was named at birth ‘Paul Michel Foucault’, though he dropped the ‘Paul’ which was his father’s name (and also, apparently, because it gave him the same initials as Pierre Mendès France). This Foucault was born in 1925, one year before his famous namesake. Whatever became of Michel Jean-Pierre Foucault? Worldcat only lists this single thesis under his name.

This entry was posted in Michel Foucault, Uncategorized. Bookmark the permalink.