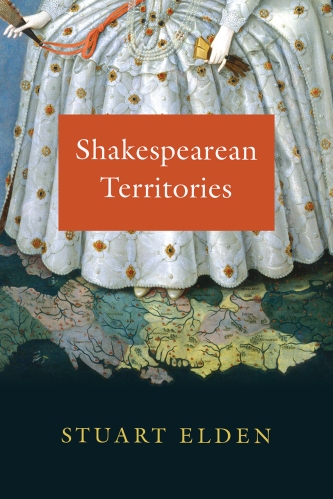 Here’s the beginning of the first review:

and given it requires subscription, most of the second:

Shakespearean Territories is a unique book: an account of Shakespeare’s canon, which offers some insightful literary analysis, written by a professor of political theory and geography. Stuart Elden’s monograph draws on Shakespeare’s plays to examine the political, geographical, economic and legal complexities of the concept and practice of ‘territory’. In doing so, Elden is able to demon- strate what he describes as Shakespeare’s ‘profound political geographical imagination’ (p. 1). Elden is well-placed to undertake such work, having a track record in examining territory in previ- ous monographs, The Birth of Territory and Terror and Territory. However, his aim is not simply to use Shakespeare as an exemplar of previous arguments, but rather to ‘open up news ways of thinking’ and ‘to push [him] further in developing this account of the contested and complicated concept and practice of territory’ (p. 3)…

For the most part, Elden offers in-depth readings of Shakespeare’s language and ideas in chapters that focus on one or two plays. Weaker chapters on colonial territories and measuring territo- ries cover a larger number of plays, rather than focused case studies, and subsequent readings can feel rushed. The balance between the quotation of primary text, secondary criticism and the author’s own analysis is sometimes out of kilter; I was left wanting more of the latter. Yet Elden’s intellec- tual ambition and risk-taking is appealing. He brings into dialogue a wide range of subjects – colonialism, navigation, cartography, military technology – that may well be covered in more detail elsewhere but do benefit from being examined alongside one another. In the book’s ‘Coda’, Elden notes the ‘significant transition’ (p. 240) England undergoes during Shakespeare’s career, which spanned the latter part of Elizabeth I’s reign and the early years of James I’s. Elizabeth and James had different ideas about some of the key concepts Elden examines, colonialism, for instance, and ruled under shifting social and economic circumstances. More of a sense of the nuances between Elizabethan and Jacobean conceptualization of territory would have been welcome throughout the book. Yet, this criticism is perhaps unfair to a book that is groundbreaking in its dual aims of illu- minating Shakespeare’s plays, while also examining territory, a contested, complex and transhistorical concept, and thereby appealing to a wide number of scholarly audiences.

My thanks to Karen and Sarah for their generous engagement with this work.

This entry was posted in Shakespearean Territories, Territory, Uncategorized. Bookmark the permalink.