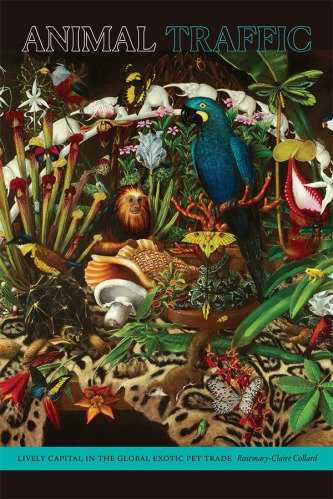 Update: there is a discussion on the New Books podcast here.

Parrots and snakes, wild cats and monkeys—exotic pets can now be found everywhere from skyscraper apartments and fenced suburban backyards to roadside petting zoos. In Animal Traffic Rosemary-Claire Collard investigates the multibillion-dollar global exotic pet trade and the largely hidden processes through which exotic pets are produced and traded as lively capital. Tracking the capture of animals in biosphere reserves in Mexico, Guatemala, and Belize; their exchange at exotic animal auctions in the United States; and the attempted rehabilitation of former exotic pets at a wildlife center in Guatemala, Collard shows how exotic pets are fetishized both as commodities and as objects. Their capture and sale sever their ties to complex socio-ecological networks in ways that make them appear as if they do not have lives of their own. Collard demonstrates that the enclosure of animals in the exotic pet trade is part of a bioeconomic trend in which life is increasingly commodified and objectified under capitalism. Ultimately, she calls for a “wild life” politics in which animals are no longer enclosed, retain their autonomy, and can live for the sake of themselves.

“This is an immensely important book for anybody concerned with capitalist natures and traffics in the nonhuman. Combining scrupulous fieldwork with stunning theorizations of ‘lively capital’, Collard adapts Marxist and feminist thought to the double task of analyzing and contesting a global trade in exotic pets. By following how wild-caught species get made into thinglike forms of capital, this book spurs a profound rethinking of commodified and noncommodified life, fetishism, enclosure, and social-ecological reproduction.” — Nicole Shukin, author of Animal Capital: Rendering Life in Biopolitical Times

“Animal Traffic brings the spaces and circuits of the exotic pet trade to life, casting light on an important aspect of defaunation in the tropics and an underappreciated way that animals are being commodified. Rosemary-Claire Collard presents rich ethnographic accounts of key sites of the exotic pet trade and weaves these together with a compelling discussion of the values, practices, and complications involved in reducing wild animals to ‘lively capital’ as well as the great barriers to decommodifying animals after their lives have been wrested from them. This is a moving and beautifully written book and a major contribution to the fields of critical animal studies, political ecology, and biodiversity conservation.” — Tony Weis, author of The Ecological Hoofprint: The Global Burden of Industrial Livestock