I’ve been making slow but steady progress on chapter nine of my territory book. A lot of this has been checking minor details in libraries, including original language sources such as the Latin for a few quotes from Newton’s Principia Mathematica. I’ve been doing some work on Samuel Pufendorf, mainly as a foil for Leibniz, and Bogislaw Philipp von Chemnitz, who wrote an interesting book in 1640 entitled Dissertatio de ratione status in imperio nostro Romano-Germanico under the pseudonym of Hippolithus à Lapide. Strangely, given its focus, there is an 18th century French translation. (Foucault discusses this work briefly in Security, Territory, Population). Chemnitz is said to have influenced the discussions at Westphalia, and provides something of a challenge to Bodin (along the lines of Knichen I think) around the relation between sovereignty and majesty.

I’ve also had a look at some of Henri de Boulainviller’s philosophical works, which are much influenced by Spinoza, but I think it’s his historical-political works that I really need to look at (of course Foucault discusses them too in ‘Society Must Be Defended’). I also read James Harrington’s Oceana, which is a very strange work that doesn’t seem to fit the chronologies I’ve been suggesting, partly because it takes land issues pretty seriously but uses ‘territory’ indiscriminately to describe ancient Rome, the Middle Ages and the present. He seems to use the term in a familiar way without any need to describe or challenge it. This seems to be in distinction to writers on the continent: such as Knichen, Althusius, Leibniz and, a little later, Johannes Hertius, who I have also been looking at.

Finally, and out of sequence, I had a look at an original of the Passional Christi und Antichristi. The British Library has what appears to be a first edition of 1521. You can see the text in a scanned form here. It’s a fairly well-known text of Lucas Cranach woodcuts, of images of Christ and the Antichrist (depicted as the Pope) on facing pages. The left-hand page has a quotation from scripture; the right-hand page a description of the contemporary parlous state of the church which is going directly against this. The opening pair, for instance, juxtaposes Christ refusing the crown as an earthly king and the Pope behind a gate with cannons and armed soldiers defending himself from an armoured figure on horseback. 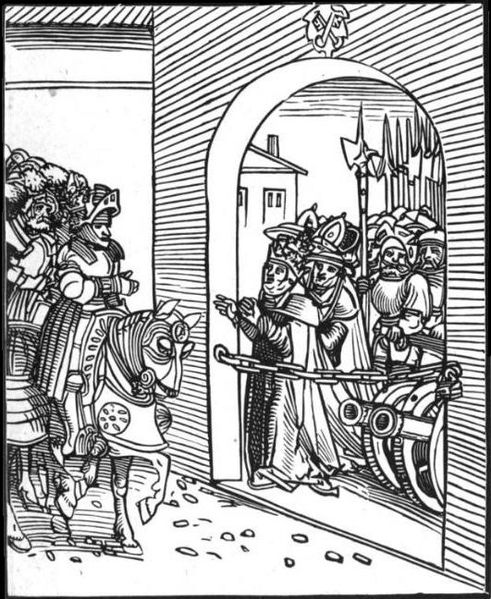 A later one shows Jesus washing feet and the Pope having his kissed by admirers. The writer of the German text was probably Philipp Melanchthon, a collaborator of Luther. The scripture is in German too. Though this predates the publication of Luther’s Bible translation, it was contemporaneous with the work on the New Testament.

Then, following up on a reference Melanchthon makes to Bartolus in a completely different source I came across a remarkable image that I want to find out more about. That’s the first task for tomorrow.