Reading David Farrell Krell on Derrida and our Animal Others

Posted on September 6, 2013 by stuartelden

David Farrell Krell has long been one of my favourite commentators on Heidegger and Nietzsche. He is the principal translator of Heidegger’s multi-volume book on Nietzsche, as well as Basic Writings and some other texts, wrote the great book Daimon Life on Heidegger and several other books. Some of those I really liked – Contagion and The Tragic Absolute on German idealism, and his books on Nietzsche such as Infectious Nietzsche – others I was less impressed by, such as Archeticture. He wrote one previous book on Derrida, The Purest of Bastards which I don’t remember getting much from. 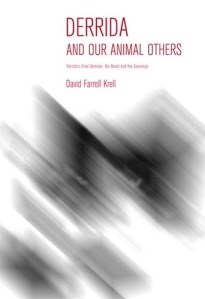 But after a long gap (at least by his standards, and coinciding with his move to emeritus status at DePaul, and to a position at Brown University) he has published a new book – Derrida and Our Animal Others: Derrida’s Final Seminar, the Beast and the Sovereign. This is a discussion of Derrida’s last two seminars, both now published in French and English. Here’s the book’s description:

Jacques Derrida’s final seminars were devoted to animal life and political sovereignty—the connection being that animals slavishly adhere to the law while kings and gods tower above it and that this relationship reveals much about humanity in the West. David Farrell Krell offers a detailed account of these seminars, placing them in the context of Derrida’s late work and his critique of Heidegger. Krell focuses his discussion on questions such as death, language, and animality. He concludes that Heidegger and Derrida share a commitment to finding new ways of speaking and thinking about human and animal life.

It’s quite a short book, and quite a lot of it is spent on two pieces that were initially published in Research in Phenomenology when Derrida’s seminars were first out in French. There is a lot going on here, and Krell is an illuminating and careful reader. He is especially good, inevitably, on Derrida’s engagement with Nietzsche and Heidegger. Some of it is quite amusing too – I enjoyed his little story of regretting not attending Derrida’s seminars in person, working out how he could have taught on Monday and Tuesday in Chicago, got the overnight flight to Paris, attended the seminar and gone to the Parisian bookstores, flown back on Thursday and taught again on Friday. “How could I, and so many other like me, have been so obtuse as to miss the best of philosophy in our time? Why did our institutions not send us there?” (pp. 74-5). His daughter apparently pointed out that people “with serious jobs” do this all the time.

There is also a powerful passage about all that the modern university has become (following a discussion of Heidegger on boredom):

Those of us who work, or who have worked, in a college or university understand better each day the double-bind of solitude: we dream of collegiality and the exchange of ideas, of collaborative projects and constructive criticism, and yet we watch in horror as the exchanges within and without the walls, in our departments and colleges as well as at conferences, become increasingly mindless, over-hasty and testy. There is probably not a single creative, successful teacher and researcher who has not dreamt of fleeing the academy as it now stands, or wobbles. Especially as the situation of the humanities deteriorates, with language departments and philosophy departments being cut or made subservient to the social sciences, and with faculties across the board being pressured to hire by profile rather than by excellence, insularophilia waxes strong. How can one avoid dreaming of a place where teaching, research, and collegiality thrive? How can one not, more realistically, dream of flight and escape when they do not thrive? And yet. How are we to make our island solitudes creative? How should grumbles become hymns? And with whom would those hymns be sung? Where, again, is that affirmative anthropology when we need it? Applying desperately for leave, no doubt (p. 149).

The book has several other strengths, and three little comments on belonging, world and epochs were really useful in terms of my earth/world work. Much of the book is a dialogue with two other books that discuss Derrida and animality – one by Michael Naas (The End of the World and Other Teachable Moments) is still unpublished; the other is Dawn McCance’s Critical Animal Studies: An Introduction. I’ve ordered the second on the strength of what Krell says here, and look forward to the first. And it has also convinced me I should go back to Derrida’s two seminars on The Beast and the Sovereign. The best commentary always sends you back to the text commented on, rather than stands in its place.