Where to start with reading Henri Lefebvre?

[The most recent version of this guide can be found here.]

This comes in response to a question to me on Twitter. Where should you start with Henri Lefebvre?

I think many people, especially in Geography, go to The Production of Space. That’s a major work, certainly, but I don’t think it’s a good place to start. It’s a difficult book, which was Lefebvre’s writing up – the theoretical culmination – of several years working on urban and, earlier, rural questions. All-too-often it is read through the lens of the first chapter – a broad, conceptual schema – and not balanced by the much more historical study found in later chapters. I’ve heard several people say that this was the first, and last, thing of Lefebvre they read, or started to read. Any serious engagement with Lefebvre has to come to terms with this book, but it’s not a good place to start.

The Critique of Everyday Life is another way in. The books of that series – three volumes from 1947 to 1982, and his last book Elements of Rhythmanalysis, which he saw as an informal fourth volume – are of their time, and are perhaps less radical and challenging today than they were then. The three volumes have been reissued in a single book by Verso. I think Everyday Life in the Modern World is the best single place to go for this aspect of his work – it’s been in English for a long time, and has been reissued in the last few years.

I mentioned the urban work above, and Writings on Cities (which includes The Right to the City and various other pieces) and The Urban Revolution are good places to start. At the very least, read them before you read The Production of Space. The forthcoming Towards an Architecture of Enjoyment will, I’m sure, become a crucial additional place to look. You can read the introduction here.

If the relation between space and politics is of interest, the State, Space, World collection shows that after The Production of Space Lefebvre continued to think about these questions, but with a larger remit than the city. It gives a sample of the work in Lefebvre’s largely untranslated masterwork, De l’Etat (long out of print). In that register, The Survival of Capitalism (out of print) and The Explosion: Marxism and the French Upheaval (on May 1968) also show his political economic analysis in practice. They really should be read together – the French version of the former reprinted parts of the latter, which are excised from the English translation, but without them the book loses some of its bite. There is also Introduction to Modernity, a curious, interesting but uneven collection of pieces, recently reissued in Verso’s Radical Thinkers series.

Lefebvre was, first and foremost, a Marxist philosopher, and any engagement with his work really needs to come to terms with both parts of that description. Dialectical Materialism is a really important work, but not an easy read, and I’d say the The Sociology of Marx is well-worth a look, probably ahead of most other things. It is out of print, but easily available second-hand. It gives a good sense of the overall trajectory of what Lefebvre was trying to do, which can be described as taking Marxist thought into lesser-known or explored areas. While there is much more on these questions today, Lefebvre wrote pioneering studies of Marxism in relation to everyday life, the city, space, time, aesthetics and so on – The Sociology of Marx gives some sense of what he was doing. His philosophical contributions are much less known in English, but Key Writings gives a representative sample of his work in this register, along with an overall take on his work. 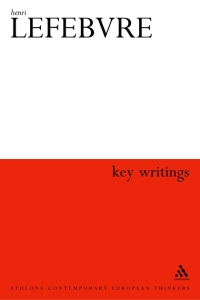 The works listed above are those in English translation. Much of Lefebvre remains untranslated. Métaphilosophie and Hegel, Marx, Nietzsche are indispensable to understanding his work; La fin de l’histoire rebalances his temporal concerns with his better-known understanding of space; and La somme et le reste gives a sense of the trajectory of the first half of his career and life. There are plenty more, though there is quite a bit of repetition, and some works that are very much of their own moment. Several are out of print, and many of these extremely difficult to find, but there were a series of new editions in the 2000s, until rights issues put an end to that valuable work. I’m working with a publisher to try to get some of the ones listed above translated into English.

In terms of the secondary literature, there is much more to chose from now than there was in the past. Andy Merrifield’s Henri Lefebvre: A Critical Introduction gives a good sense of the relation between the man and his work, while Rob Shields’s Lefebvre, Love and Struggle and my Understanding Henri Lefebvre are more directed towards the work in itself. I think it’s fair to say mine is the most comprehensive study, though it still leaves lots under-examined, and its philosophical approach isn’t to everyone’s taste.

[updated 14 December 2013, with links to books and some minor additions; 3 April 2014 with links to the one-volume Critique of Everyday Life and the introduction to the architecture book.]

10 Responses to Where to start with reading Henri Lefebvre?