Where to start with reading Peter Sloterdijk?

Posted on April 14, 2014 by stuartelden
[The most recent version can be found here.]

Where should you start with reading Peter Sloterdijk? I have previously done this with Henri Lefebvre, and Chathan Vemuri asked me the same question for Sloterdijk. This is my attempt at answering this, largely in relation to works already in translation – comments or additions welcome.

What is interesting is that in quite a short period of time, Sloterdijk has gone from very little being translated to almost everything either in print or under contract. Yet he can be a frustrating read, especially in his short works, and it is not always clear how books work in relation to each other. 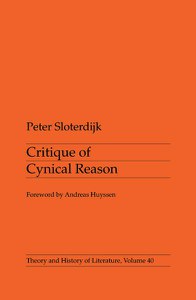 His two first works (aside from a book he seems to have largely disowned) were Critique of Cynical Reason and Thinker on Stage: Nietzsche’s Materialism. Both were translated into English fairly quickly, but then none of his books were translated for almost two decades, even though he was publishing furiously in German and translations into other languages were being made regularly. The Critique is certainly worth a look still, and Nietzsche remains a continual influence even on his later work – his little book Nietzsche Apostle was recently translated.

Of his more recent major works, I’d suggest beginning with either You Must Change Your Life or In the World Interior of Capital, depending on whether you are most interested in philosophy of the self or philosophy of the world.

The latter develops ideas in his monumental Spheres trilogy of books – Bubbles, Globes, Foam – but as yet only the first is available in English translation; the second part is in press. Parts of the analysis also appeared in the short book Terror from the Air, and two excerpts in Society and Space (one of which is open access). You can hear me discussing the work here – a presentation at the 2013 AAG meeting.

You Must Change Your Life develops some of the ideas of his controversial ‘Rules for the Human Zoo’ piece, which appeared as a short book in German and French, but was published in article form in Society and Space in 2009.

There are lots of shorter books out there as well now – as well as the previously mentioned books on Nietzsche, there are ones on Derrida; the clash of monotheisms in God’s Zeal; The Art of Philosophy; Theory of the Post-War Periods; and Philosophical Temperaments. Somewhere in between the very long and very short books is Rage and Time which retells the history of Western thought from the perspective of this emotion or affect – the German title Zorn und Zeit is a parody of Heidegger’s Sein und Zeit.

A good place to get an overview of his wide interests is the book of interviews Neither Sun nor Death. There are lots of short pieces available too – some individual articles and some excerpts from books. Sean Sturm has an excellent listing of these on his blog Te Ipu Pakore: The Broken Vessel. Of those short pieces, his polemical piece ‘The Grasping Hand‘ is worth a look to see his reactionary politics (and see also the pieces that it triggered from, among others, Axel Honneth).

It is worth paying tribute to Sloterdijk’s translators – of the recent ones, notably Steve Corcoran, Mario Wenning and, above all, Wieland Hoban. Hoban has translated many of the long books mentioned above, including Bubbles, You Must Change Your Life and In the World Interior of Capital. This is substantial, and very important work.

In terms of secondary literature, this is developing quickly. In 2009 Society and Space did a theme issue on his work, including the above-mentioned translations and contributions by Eduardo Mendieta, Nigel Thrift, Marie-Eve Morin, René ten Bos, Sjoerd van Tuinen, Luis Castro Nogueira, Jean-Pierre Couture, Francisco R Klauser, Miguel de Beistegui, and Keith Ansell-Pearson. At the time there was relatively little work on him in English – things have changed a lot in five years. You can read the introduction by Eduardo and me open access here. There was also an earlier theme issue of Cultural Politics on his work.

Another collection – In Medias Res: Peter Sloterdijk’s Spherological Poetics of Being – is available open access from Amsterdam University Press. It is edited by Willem Schinkel & Liesbeth Noordegraaf-Eelens, and includes pieces by the editors, van Tuinen, Christian Borch, Bruno Latour and an interview with Sloterdijk, among others. Van Tuinen has published an excellent introduction in German – Peter Sloterdijk: Ein Profil (open access); Couture is writing a book on Sloterdijk at the moment. There are lots of articles and reviews out there, of course – many of which I’ve linked to on this site. 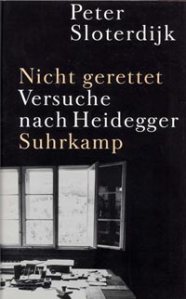 I think that most of his so-far-untranslated works are under contract with one or other of the presses that have published his work in English to date. Of the untranslated works I’d point, above all, to the remaining volumes of Spheres, and also to Nicht Gerettet, which is a collection of essays on Heidegger (one of which is in Sloterdijk Now), and Der ästhetische Imperativ, a collection of writings on art.

And, of course, he continues to write new books all the time…

19 Responses to Where to start with reading Peter Sloterdijk?