Thompson and Zizek (ed.) The Privatization of Hope: Ernst Bloch and the Future of Utopia 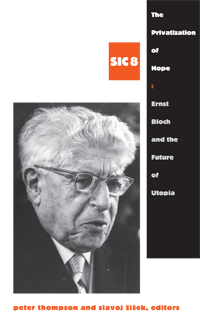 The concept of hope is central to the work of the German philosopher Ernst Bloch (1885–1977), especially in his magnum opus, The Principle of Hope (1959). The “speculative materialism” that he first developed in the 1930s asserts a commitment to humanity’s potential that continued through his later work. In The Privatization of Hope, leading thinkers in utopian studies explore the insights that Bloch’s ideas provide in understanding the present. Mired in the excesses and disaffections of contemporary capitalist society, hope in the Blochian sense has become atomized, desocialized, and privatized. From myriad perspectives, the contributors clearly delineate the renewed value of Bloch’s theories in this age of hopelessness. Bringing Bloch’s “ontology of Not Yet Being” into conversation with twenty-first-century concerns, this collection is intended to help revive and revitalize philosophy’s commitment to the generative force of hope.

1 Response to Thompson and Zizek (ed.) The Privatization of Hope: Ernst Bloch and the Future of Utopia