Mapping the world through its airport connections – excellent visualisation 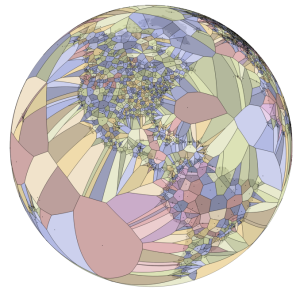 Data visualization designer Jason Davies has been playing with the topic of boundaries for some time already. Jason is exploring mathematical functions to redraw the global boundaries according to different phenomena. In his latest map he used a spherical Voronoi diagrams to draw global airport map where each region is closer to a particular airport than any other.

Full story here; and map itself here as a rotatable globe – one of many maps at that site. Thanks to various people for sharing this with me on Facebook.

This entry was posted in Boundaries. Bookmark the permalink.