AAG award citation for The Birth of Territory

I announced the AAG Meridian award for The Birth of Territory before, but they have now posted the citation online: 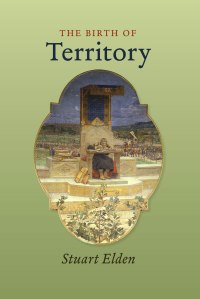 This award is given for a book written by a geographer that makes an unusually important contribution to advancing the science and art of geography.

The Birth of Territory is a landmark study of territory as an organizational principle to divide, order, and control land.  Despite territory’s foundational position in geography and politics, it has received relatively little critical attention in terms of its historical, geographical, and political production.  Stuart Elden provides a thorough genealogy of territory and its evolution in western political thought from ancient to early modern periods and substantially pries open a concept that is often taken for granted. He convincingly presents a case for territory as contingent, contested, and far from settled in terms of its political salience and uneven development, with sources ranged from historical, political, and literacy texts and practices. Written in an eloquent and engaging style, Elden’s work will surely provide a new baseline for geographers’ understanding of territory and become an important text for geography and associated disciplines in the investigation of space, power, land, development, and political order.

Also at this award notice are the citations for the John Brinckerhoff Jackson Prize for Anne Kelly Knowles, Mastering Iron: The Struggle to Modernize an American Industry, 1800-1868; the Globe Book award for Michael Dear, Why Walls Won’t Work: Repairing the US–Mexico Divide; and 2012 Meridian Book award for Richard Schroeder, Africa after Apartheid: South Africa, Race and Nation in Tanzania.

This entry was posted in Books, Politics, Territory, The Birth of Territory. Bookmark the permalink.

1 Response to AAG award citation for The Birth of Territory