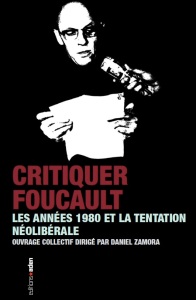 I’ve been away, but several people have been sending me links to a recent string of articles on Foucault’s supposed sympathies to neoliberalism. The start of the debate – in English at least – was the translation of an interview with Daniel Zamora at Jacobin. The interview relates to a book entitled Critiquer Foucault: Les années 1980 et la tentation néolibérale which has just been published. Clare O’Farrell rounds up the key pieces at Foucault News.

The book is a collective work, edited by Zamora. I’ve not read it yet, and suspect that very few of those commenting on it have either. Anything said now is necessarily provisional.

The first thing that struck me was the question – is this news? Foucault’s 1979 lectures on neoliberalism – the misnamed The Birth of Biopolitics – have been widely available for a decade. They were first published in French in 2004, and translated into English in 2008. Some people – Thomas Lemke being the standout example – were discussing them before then on the basis of the archived tape recordings.

Others have made the suggestion that Foucault had some sympathy to neoliberalism as well – Paul Patton, for example. Plenty of others have discussed Foucault in relation to neoliberalism and what it has become – Jamie Peck and Nick Gane immediately come to mind. Clive Barnett offers some thoughts here, building on earlier pieces in 2011 and 2013. So, again, this is not really news. To assess the validity of the claims people should really read or re-read Foucault’s lectures – as far as I can tell, the ‘revelations’ are not based on any new material. Zamora mentions some other material, but says it is all available.

The real revelation would be a reading of a text Foucault drafted sometime around 1980-81, entitled “libéralisme comme art de gouverner” and mentioned by Michel Sennellart in his notes to The Birth of Biopolitics and On the Government of the Living. This text is not published. It’s notable that after the 1979 lectures all of Foucault’s courses are on antiquity or the early Church, though he ran his seminar in 1980 on liberalism in the 19th century, and sponsored seminars run by François Ewald on the sociology and philosophy of law in 1981 and 1982. Those seminars – some of which were apparently taped – would provide some interesting supplementary material. Incidentally, I am puzzled by how Foucault can be somehow tainted by what Ewald has gone on to do. Ewald has been described as a ‘right-Foucauldian’ – but his work and politics is hardly a revelation. (That this might be seen as news to anglophones is maybe a side-product of something I’ve remarked on before – that few people read the work of Foucault’s colleagues and collaborators, much of which isn’t available in English.)

Another immediate reaction to the initial piece was that there is a risk that we take Foucault’s lectures as they are now presented to us, as ‘books’. But they are obviously not of the same status as the books he published himself, over which he spent years of work, nor are they are of the same standing as the countless shorter works he published in his lifetime – some based on lectures, certainly, but also articles, interviews, petitions, etc. to which he put his name. It is fairly shocking that we lack a complete English translation of Dits et écrits (which collects nearly all of these)- twenty years after it appeared in French. The Anglophone ‘Essential Works‘ is badly misnamed – at best it is a poor substitute for the richness of the French.

One of the implications of this is that Foucault’s verbal proclamations should be taken as that – provisional, of the moment, only part scripted (compare Lectures on the Will to Know to get an indication of what Foucault’s notes look like, without the supplement of the tape-recordings). Valuable, fascinating and revealing certainly, but to be used with caution. There is a remark in one of the lectures (10th March 1982, second hour) where Foucault asks his audience if they have recordings of his lectures of the past few years they could share with him –

I understand that there are some people recording the lectures. Very well, you are obviously within your rights. The lectures here are public. It’s just that maybe you have the impression that all my lectures are written. But they are less so than they seem to be, and I do not have any transcripts or even recordings. Now it happens that I need them. So, if by chance there is anyone who has (or knows someone who has) either recordings – I believe there is someone called Monsieur [Jacques] Legrange – or obviously transcripts, would you be kind enough to tell me, it could help me. It is especially for the last four or five years (The Hermeneutic of the Subject pp. 378/395-6).

The four or five years refers to all or most of Foucault’s post-sabbatical lectures, but certainly including The Birth of Biopolitics.

Foucault, in these 1979 lectures, undoubtedly found neoliberalism interesting and worthy of his devoting substantial attention. But aside for historical and contextual reasons for why this might be the case (which I cannot address here) this was a very early ‘neoliberalism’ – the lectures were delivered before Reagan or Thatcher were elected. And this course is unusual in being the only one of the Paris courses that was directed toward the twentieth-century. Foucault’s mode of reading texts often makes it look like he is agreeing with arguments, when he is really trying to reconstruct them, to understand their logic, and so on. To suggest there is some sympathy to neoliberalism is one thing, to claim he was a neoliberal/libertarian or other labels is quite another. Compare these lectures’ tone to those on early Christianity and late antiquity in the next two courses – does this mean Foucault was also a Christian and a stoic?

Also, the title of the interview is ridiculous – of course we can criticise Foucault. There are critiques everywhere – far too many to list and link. Even people who find his work invaluable criticise him. In the book I’m currently writing on Foucault I’m largely taking a synthetic and exegetical tone, but see what I’ve said about Foucault and territory for a different approach.

I hope Zamora’s edited book itself (despite its title) will be a good deal more nuanced and interesting than the publicity so far. It has certainly succeeded in getting mainstream media attention in a way few books on Foucault have. Perhaps I’ll say more when I’ve read it. I hesitated about giving this even more attention by writing up these few thoughts, but enough people contacted me by email, twitter or facebook that I thought it was worth saying something.