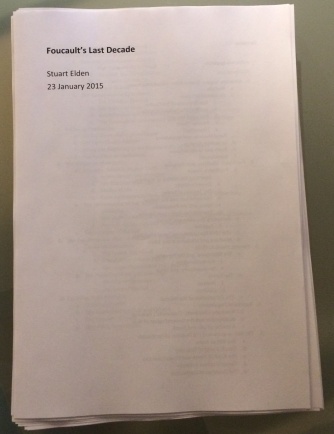 Since the last update I’ve spent two long days working on the individual chapter files, checking and rechecking things, filling in references, and reorganising some things. In particular I reworked all the parts on the lettres de cachet. I’ve decided I need to re-read Le désordre des familles once more and might say more about it. It’s one of Foucault’s least-known works, but he worked on this topic, on and off, in the 1960s, 1970s and 1980s. This book is hard to fit into the overall chronology because it spans so much time, and I’m not yet convinced with how I’m dealing with it. I’ll be taking a copy with me to Melbourne.

I now have a single file for the manuscript of this book. It’s not quite as good as I’d hoped to have at this stage, and there are still lots of things to do. The book is also too long – possibly in absolute terms, but definitely for the contract. The key thing to be re-done is Chapter One, which needs quite a bit of work, including one new section on a yet-to-be-published course, and isn’t at the same stage as the rest of the book. A first draft – at least for me – means that the main elements are there, the references are in fairly good shape, and the text is reasonably well-written. But it also means that the book is not finished – it needs tightening up, smoothing of argument and citation, and some other stylistic things. I may move some bits around, break chapters in different places, and so on. I will also go through more secondary literature, especially the Eribon, Miller and Macey biographies again, and doubtless add in some references. But with the exception of Chapter One I have, just about, met my goal of having this version finished before I head to Melbourne.

This project is in no sense portable – in my home study I have all of Foucault in French and in English, some in multiple editions, lots of secondary literature and reference works. Finding or checking a reference can be done very quickly here. While I could find much, though by no sense all, of that in Melbourne, it would be scattered across multiple libraries and working on that aspect of the project there would be very time-inefficient. But taking a near complete draft with me, to read, edit and tighten is much more effective. I’ll be in Australia for two months, but have plenty of other things I intend and need to do there too.

Out of curiosity for how I was thinking the last time I was at this stage, I went back and read the updates I wrote on The Birth of Territory when I was in Seattle for a visiting post at University of Washington. That was in the autumn of 2010 – I went there with a draft, and left with a better draft. It took six weeks between those two stages. Reading those updates gives some idea of the work still to be done with this text. Off to the airport…

You can read more about the Foucault’s Last Decade project, along with links to previous updates, here.

This entry was posted in Foucault's Last Decade, Michel Foucault, The Birth of Territory, Writing. Bookmark the permalink.