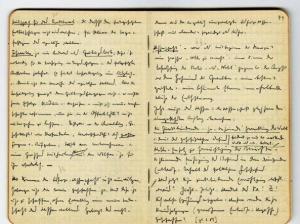 As many readers of this blog will know, I’ve been posting various bits of news about Heidegger’s ‘Black Notebooks’ over the past year or so. In that time I’ve been asked to speak on Heidegger at events in the UK and USA, and a few people have suggested I write something. I’ve always said ‘no’.

Heidegger has been a crucial thinker to my work. My PhD examined the relation between Nietzsche, Heidegger and Foucault; the book that came from it was Mapping the Present: Heidegger, Foucault and the Project of a Spatial History. The book, as the title suggests, looked principally at Heidegger and Foucault, though much of the Nietzsche material was reworked into other chapters. It took seriously Foucault’s claim that Heidegger was, for him, ‘the essential philosopher’. Both the PhD and book included a chapter that looked at how Heidegger read Nietzsche and Hölderlin during the Nazi period. I discussed what was then available in terms of Heidegger’s own Nazi involvement in some detail.

My next book, Understanding Henri Lefebvre: Theory and the Possible, and some related articles made the claim that Lefebvre could be understood in relation to Heidegger too and that some key elements of his thought – everyday life, his understanding of space, and metaphilosophy – were, in some sense, Heideggerian, even if subjected to a fundamental critique.

Somewhat to my surprise I then returned to Heidegger himself for my third book, Speaking Against Number: Heidegger, Language and the Politics of Calculation. I had a couple of pieces on Heidegger which I thought might be developed and came to the realization that there was a way to make them work together. That book has three main chapters – Speaking: Rhetorical Politics; Against: Polemical Politics and Number: Calculative Politics.

Heidegger is not an explicit focus in my two books on territory, though in Terror and Territory he is mentioned in a few places, and some of his claims were important in thinking about The Birth of Territory. Given how much reading him with Foucault was important for my first understanding of Foucault, he lurks somewhere in the background of the Foucault’s Last Decade project, and may yet become an important figure in the work I’m doing on space/world/globe/geopolitics.

In the last couple of years, I’ve been debating whether to produce a new edition of Speaking Against Number. That book was never published in paperback, and I wanted it to become more widely available. I long tried to persuade Edinburgh University Press to do a paperback, but they continually said ‘no’. They also keep putting up the price of the hardback, despite the pirate versions online. I eventually got an agreement from them to let me have the paperback rights so I could take the project to another publisher.

I did actually write a draft proposal to do just that. It would have been the book as published in late 2005, two essays from around that time – “Heidegger’s Animals” and “National Socialism and the Politics of Calculation”; and a new introduction. The idea would be that the new introduction would account for the materials published in the intervening decade including, among other things, the ‘Black Notebooks’.

But in the end I decided against it. To do it properly would not be a simple job. For Speaking Against Number I worked through the entirety of what was then published of the Gesamtausgabe, in chronological (not volume) sequence, making use of existing translations where possible, though much was not translated. It took a lot of time, and was intense and exhausting work. To be faithful to the project now would require going through a decade’s worth of new volumes – I guess that would be in the region of 20-30 newly-published volumes – all the new translations, and getting back up to speed on the secondary literature. I’d probably end up re-reading lots of things. My German reading skills were always limited, but have not been used much in the last decade, so would need a lot of work to get back up to speed. All this would take me at least six months of intensive work, if not longer, just to write what would ultimately be a book chapter – an introduction to the new edition.

I figured that if I had that much time to devote to a project then I wouldn’t chose to spend it on this. There are so many other things I’d like to work on, and I know from previous projects, and this current Foucault one, that there is a kind of obsessive, completest tendency to the way I work. I could see it growing in work and intensity.

Where does this leave the argument of Speaking Against Number? In that book I basically take three cuts through ways Heidegger has conceived of the political. One thing I try to do in the first chapter is to show how Heidegger was a political thinker pre-Being and Time, and how Being and Time cannot be read as a politically-neutral text. (This is one of the responses of the Heidegger-faithful – “Heidegger became a Nazi in the 1930s and work before that is untainted”.) The second chapter looks at the explicitly Nazi work – before, during and after being Rektor of Freiburg university. I think that there would be details in those chapters I’d probably revise in the light of new materials, but not major differences.

In the third chapter, I tried to show how, from around 1934-35, Heidegger moved into a period of internal-opposition. Still a member of the party, still holding to his original sense of the movement’s potential, but critical of some aspects. Key to this was, I suggested, calculation – a term which is crucial to understanding his work on machination and technology. I read his interest in this question from mid-1920s work on Aristotle and Descartes through to post-war works. In writings published in his lifetime the two key political movements that are criticized for their calculative politics are Americanism and Bolshevism. The great revelation of the first wave of manuscripts such as the Beiträge and Besinnung, and some lecture material in more-coded fashion, was that there was a third object of critique: National Socialism. That movement, seen initially by Heidegger as offering a potential challenge to other modern politics, came to be seen as its most egregious symptom.

The most recent material, including the Black Notebooks, adds a fourth object of criticism: ‘World-Jewry’. There were hints of this before, but the Notebooks, in some key passages that have now been widely discussed, make it explicit. In the latest volume we are being told this is explicitly tied to the Holocaust. The mechanized, industrial, calculative reading of that, developed by Heidegger and many others, is given a new and utterly horrendous twist. Heidegger suggests this was a self-immolation – the Jews, as the calculative people, created the means of their own destruction.

A new preface or introduction to Speaking Against Number would need to work through that material, and those awful claims, in detail. Some of the arguments of Chapter Three would need to be qualified; much would need to be added. It would be grim work, wrestling with difficult concepts, abysmal views, and torturous constructions, as much as with the technical-philological challenges of notebook writings rather than polished texts. I suspect there is much more in the notebooks themselves than the few passages being widely discussed, and that much of that would also add complications to any argument made before their publication.

I don’t have the inclination or patience to do that work. I would not rely – as I do in this post – on what is being reported about what they say, I’d work through them myself. Sure, it could be done in a quick, cursory way. Lots of people – not all, of course – don’t seem to have the same scruples as me, and are rushing to judgment. Many see this as confirming what they’ve felt all along; others that there is nothing much new here; others cling to the idea that there is some pre-political Heidegger which can be rescued from all that. But that isn’t how I wanted to work when I wrote Speaking Against Number, and it isn’t how I want to work now. There are only so many things I can do with my time, and devoting my attention to this work isn’t a priority for me.