Visiting Boko Haram territory – an excerpt from Helon Habila’s new book, The Chibok Girls (plus links to my article and bibliography) 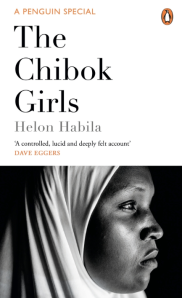 On 14th April 2014, 276 girls disappeared from a secondary school in northern Nigeria, kidnapped by the world’s deadliest terror group. A tiny number have escaped back to their families but over 200 remain missing.

Reporting from inside the traumatised and blockaded community of Chibok, Helon Habila tracks down the survivors and the bereaved. Two years after the attack, he bears witness to their stories and to their grief. And moving from the personal to the political, he presents a comprehensive indictment of Boko Haram, tracing the circumstances of their ascent and the terrible fallout of their ongoing presence in Nigeria.

While writing a paper entitled “The Geopolitics of Boko Haram and Nigeria’s ‘War on Terror’” (open access), I produced a detailed bibliography of academic writings on Boko Haram. At the time (between 2012 and 2014) there was a manageable amount of literature – things have developed substantially since, and as a consequence the bibliography is out of date. But it may still be of some use. You can download the bibliography here (pdf).

This entry was posted in Territory, Uncategorized. Bookmark the permalink.

1 Response to Visiting Boko Haram territory – an excerpt from Helon Habila’s new book, The Chibok Girls (plus links to my article and bibliography)