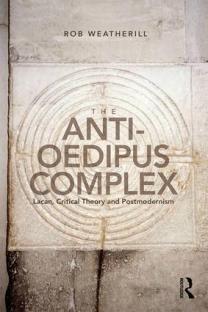 Rob Weatherill, The Anti-Oedipus Complex: Lacan, Critical Theory and Postmodernism – now out with Routledge. Thanks to Sebastian Budgen for the link.

The Anti-Oedipus Complex critically explores the post-‘68 dramatic developments in Freudo-Lacanian psychoanalysis and cultural theory. Beginning with the decline of patriarchy and the master, exemplified by Freud’s paean for the Father, the revolutionary path was blown wide open by anti-psychiatry, schizoanalysis and radical politics, the complex antinomies of which are traced here in detail with the help of philosophers such as Nietzsche, Baudrillard, Levinas, Steiner, Žižek, Badiou, Derrida and Girard, as well as theologians, analysts, writers, musicians and film makers.

In this book, Rob Weatherill, starting from the clinic, considers the end of hierarchies, the loss of the Other, new subjectivities, so-called ‘creative destruction’, the power of negative thinking, revolutionary action, divine violence and new forms of extreme control. Where does this leave the psychoanalytic clinic – adrift in postmodern indifference? Does the engagement of the Radical Orthodoxy movement offer some hope? Or should we re-situate psychoanalysis within a ‘genealogy of responsibility’ (Patočka / Derrida) as it emerges out of the sacred demonic, via Plato and Christianity?

The Anti-Oedipus Complex will be of interest to psychoanalysts, psychotherapists, counsellors, social workers and scholars in critical theory, philosophy, cultural theory, literary theory and theology.