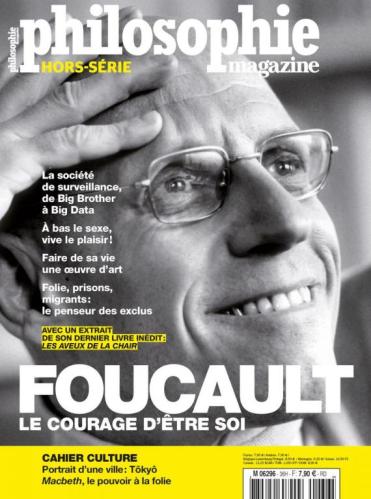 Philosophie Magazine has a new special issue on Foucault, including an extract from Les Aveux de la chair, the soon-to-be-published volume IV of the History of Sexuality.

You can read some of the issue, though not the extract, on a viewer on the issue page.

Finally, if you can’t wait for the book itself, or its translation, there are two other extracts from draft versions of the manuscript already published. I’m not sure if they are in the version to appear shortly. One is well known, and I think most likely to be in the final text – ‘The Battle for Chastity’.

The other is the ‘Maurice Florence’ piece, which was an excerpt from a draft introduction and was edited by François Ewald for publication in the Dictionnaire des philosophes. While it’s long been known that this was from a draft of an introduction to the History of Sexuality Volume II, there are multiple versions of that text, which appeared in revised form in The Use of Pleasures (for a comparison of those versions, see here).

I cautiously claimed that the ‘Maurice Florence’ excerpt was from the early draft on Christianity in Foucault’s Last Decade, p. 120. I’ve recently found a source which corroborates this. I’m not sure if this was in the version Foucault left behind at his death. (There is a long and complicated history behind all these different texts, which I explore in detail in Foucault’s Last Decade.)

Both ‘The Battle for Chastity’ and ‘Maurice Florence’ are available in English, the first in Politics, Philosophy, Culture and Essential Works I, the second in The Cambridge Companion to Foucault (1st edition only) and Essential Works II, among other places. Most reprints of ‘Maurice Florence’, in both French and English, omit the opening paragraph, written by Ewald. That paragraph can be found in both languages here.