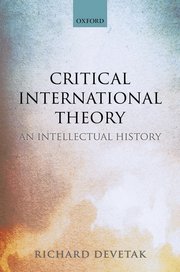 Whether inspired by the Frankfurt School or Antonio Gramsci, the impact of critical theory on the study of international relations has grown considerably since its advent in the early 1980s. This book offers the first intellectual history of critical international theory.

Richard Devetak approaches this history by locating its emergence in the rising prestige of theory and the theoretical persona. As theory’s prestige rose in the discipline of international relations it opened the way for normative and metatheoretical reconsiderations of the discipline and the world. The book traces the lines of intellectual inheritance through the Frankfurt School to the Enlightenment, German idealism, and historical materialism, to reveal the construction of a particular kind of intellectual persona: the critical international theorist who has mastered reflexive, dialectical forms of social philosophy. . In addition to the extensive treatment of critical theory’s reception and development in international relations, the book recovers a rival form of theory that originates outside the usual inheritance of critical international theory in Renaissance humanism and the civil Enlightenment. This historical mode of theorising was intended to combat metaphysical encroachments on politics and international relations and to prioritise the mundane demands of civil government over the self-reflective demands of dialectical social philosophies. By proposing contextualist intellectual history as a form of critical theory, Critical International Theory defends a mode of historical critique that refuses the normative temptations to project present conceptions onto an alien past, and to abstract from the offices of civil government.