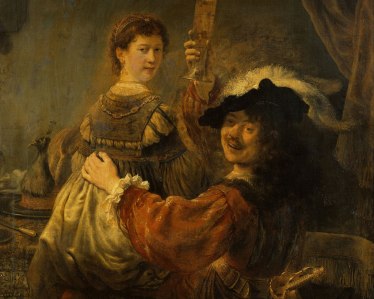 In May 1913, German sociologist Georg Simmel wrote to the poet and essayist Margarete von Bendemann to express his joy at seeing some ‘magnificent Rembrandts’. The encounter got him thinking. His gushing praise might place him in the category of an enthusiastic fan, but Simmel’s interest went far beyond a mere affection for Rembrandt’s portraits. The following year, Simmel moved from Berlin to Strasbourg, taking up his first proper academic post at the age of 56, and developed an increasing interest in how to conceptualise life. Uncertain times in Europe and the wrench of leaving his beloved Berlin had an impact on both his writing and thinking. Life, experience and modernity had always been preoccupations for Simmel, but something changed. In pursuit of inspiration, Rembrandt’s portraits proved to be source of ideas and insight as Simmel sought out a new conceptual palette. These paintings seemingly gave Simmel a template for how to think about life. Suddenly, inspired by Rembrandt, the theories he had been wrestling with began to take shape.

Rather nervously, Simmel began work on a book about Rembrandt. He wasn’t quite sure of his approach and nor, having only tangentially written about art and art exhibitions in the past, was he confident in his analytical and aesthetic eye. His nerves didn’t actually settle until the book was published and began to sell well – it was eventually the best-selling of his books during his lifetime. The root of Simmel’s anxiety was the unusual nature of the volume he was working on. Cutting across bodies of knowledge and roaming around disciplines, this was an unconventional venture. On the surface it is a long essay in the philosophy of art, look more closely and something else is going on. As Simmel wrote in a letter to Salomon Friedlaender in October 1914, the book he was working on was to pose the ‘problem of life in art’. [continues here]