Posted on October 8, 2019 by stuartelden 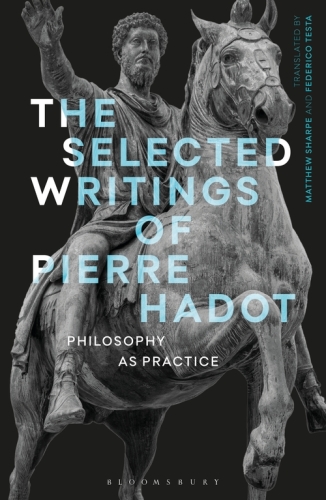 This collection of writings from Pierre Hadot (1992-2010) presents, for the first time, previously unreleased and in some cases untranslated materials from one of the world’s most prominent classical philosophers and historians of thought.As a passionate proponent of philosophy as a ‘way of life’ (most powerfully communicated in the life of Socrates), Pierre Hadot rejuvenated interest in the ancient philosophers and developed a philosophy based on their work which is peculiarly contemporary. His radical recasting of philosophy in the West was both provocative and substantial. Indeed, Michel Foucault cites Pierre Hadot as a major influence on his work.

This beautifully written, lucid collection of writings will not only be of interest to historians, classicists and philosophers but also those interested in nourishing, as Pierre Hadot himself might have put it, a ‘spiritual life’.

Part 2: Aspects
5. ‘Conversion’
6. ‘The Division of the Parts of Philosophy in Antiquity’
7. ‘Philosophy, Dialectic, and Rhetoric in Ancient Philosophy’

Part 4: Figures
10. ‘The Figure of the Sage in the Greek and Roman Antiquity’
11. ‘Physics as a Spiritual Exercise, or Pessimism and Optimism in Marcus Aurelius’
12. ‘On an Interrupted Dialogue with Michel Foucault: Convergences and Divergences’

Part 5: Ends
13. ‘The End of Paganism’
14. ‘Models of Happiness Proposed by the Ancient Philosophers’

This entry was posted in Pierre Hadot, Uncategorized. Bookmark the permalink.

1 Response to The Selected Writings of Pierre Hadot, translated by Matthew Sharpe and Federico Testa, Bloomsbury, 2019