In the last update, I mentioned the work I’d been doing in Paris and Tübingen, and said I’d agreed to write a book on Foucault in the 1960s, again for Polity, with the working title of The Archaeology of Foucault immediately after I’ve finished this one on the 1950s.

Since then I’ve been back in Paris, mainly working through the Bibliothèque nationale collection of Foucault’s papers from the 1940s and 1950s. There are all sorts of fascinating things here, and if I was writing a biography I would doubtless do a lot more with it. I’m interested in the intellectual side of his life only, and so it’s letters from people like Ludwig Binswanger and Georges Dumézil that hold most interest. There is also some important correspondence about his posts in Lille and Uppsala, as well as some concerning early publications, including some contracts. These really help with being precise on dates. But as well as resolving a few things that were uncertain, there were more than a few surprising things which have given me other things to track down and try to resolve. Some of the material here has been used in the Foucault à Münsterlingen book and the Un succès philosophique collection. But there are also student ID cards, flyers for events, his PCF membership card, some address books, photographs, school timetables, exercise books and some essays, pay slips and tax returns, insurance for his car… Letters to his family are under an embargo until 2050, but there is still a lot of stuff available.

One box I looked at mainly for completeness sake was interesting, not for its direct content but for a connection I can now make. I’ve mentioned before how Foucault used letters, flyers and other bits and pieces as scrap paper, either to write notes on or to fold to keep papers together. One of these in this box was a letter from a lawyer saying he was enclosing a letter for Foucault to sign. The date looked familiar, and cross-referencing it with my timeline and another source showed that it related to Foucault’s transfer of Histoire de la folie to Gallimard from Plon. A quick online search showed that this lawyer did indeed work for Gallimard. A minor link in a story now has a source.

A couple of letters are in another collection at the BnF, so I had to go the Music reading room to consult them. Foucault had some friendships with composers in the 1950s, and especially important was his relationship with Jean Barraqué. The correspondence between Foucault and Barraqué isn’t here – both Didier Eribon and Barraqué’s biographer Paul Griffiths discuss it, so I’m trying to get access. But checking what the BnF does have relating to Barraqué was itself interesting. Another file could be consulted at the Bibliothèque-Musée de l’Opéra, so I went there one morning.

I’ve also been spending some early evenings at the main Mitterand site, working on some texts that are hard to find in the UK. These include some old issues of journals in which Georges and Jacqueline Verdeaux published the results of their work at the Hôpital Sainte-Anne. Foucault worked with them as an assistant in the early 1950s. And this site is helpful for finding most of the things that the archival material makes me want to check. The microfilm and microfiche readers at the BnF are seriously old and hard work. Unlike the British Library they are not linked to computers which allow you to scan and email images, and working with texts on them is more than a bit of a pain. But some things that the BnF has can only be accessed this way, so I spent several hours on them.

I also ordered the Annales of the Université de Lille for all the years Foucault taught there, as part of an attempt to pin down exactly what he taught and when. But the library didn’t give me access to them, saying some were lost and some being conserved. I’ve looked at these before at the British Library but wanted to look again. Eventually I found that they have been digitised by the Lille university library and are accessible online, though unfortunately only as single page images and not searchable. Again a slow process which would be much quicker on paper. This gave a bit of information, but not all that I was hoping for, so I’ll keep searching.

Last week I went to the Collège de France for the first time – something I probably should have done years ago, given how much I’ve written about Foucault’s lectures there. My reason was that they have the archives of Dumézil. There is only a very partial inventory online, so I had to go there first to consult the version of paper and work out what I wanted to see. There is not much concerning Foucault, but a few related things were useful.

The Archives Nationales has a letter Foucault wrote to Ignace Meyerson. I was alerted to this by Alessandro de LimaFrancisco’s thesis on Foucault and psychology. I’d been to the Archives Nationales before for an exhibition, but most of the collection has relocated from the central Paris site to a new building in the suburbs at Pierrefitte-sur-Seine, so I took a trip out there one rainy Saturday. The file also has letters from Dumézil to Meyerson. 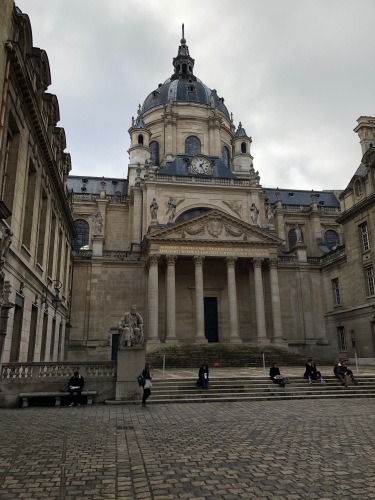 Most of the time I’ve been given access to things fairly easily, though getting into the Sorbonne library was a bit more complicated. You couldn’t get a library account set up without going in person; you couldn’t check availability of things until you had an account; and then when I was all set up in the library the document couldn’t be ordered online. But once I went to the Salle du Reserve, and just asked for it, they brought it in minutes. I think I have now seen all of the extant copies of Foucault’s secondary thesis on Kant, or at least all that are accessible – his own, Canguilhem’s, Hyppolite’s, the Sorbonne’s and the photocopy at IMEC. A bit obsessive, no doubt, but I now have a definitive answer to a question that was bothering me.

I still have a few days in Paris later on this trip, but tomorrow I’m back up to IMEC. There I will be mainly going back through some Althusser’s papers that relate to Foucault, but also hoping to do a bit of work with the Jean Wahl archive.

The previous updates on this project are here; and the previous books Foucault’s Last Decade and Foucault: The Birth of Power available from Polity. The related book Canguilhem came out in 2019, and is discussed a bit more here. Several Foucault research resources such as bibliographies, short translations, textual comparisons and so on, produced while doing the work for these books, are available here.