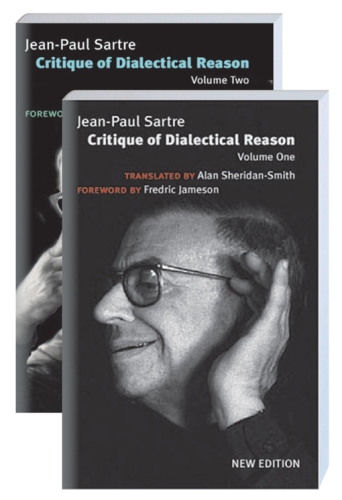 Robert Boncardo on the sixtieth anniversary of Jean-Paul Sartre’s Critique of Dialectical Reason at the Verso blog.

Celebrating its sixtieth birthday this year, and enjoying a new print run thanks to Verso Books, the first volume of Jean-Paul Sartre’s Critique of Dialectical Reason remains an enigma. Sartre is incontestably one of the 20th century’s most famous thinkers. Yet the Critique is perhaps the biggest flop in all of modern French philosophy. While very few people might have actually read Being and Nothingness cover to cover, it at least has a place on a large number of readers’ bookshelves. By contrast, almost no-one owns a copy of Sartre’s Critique. Should anyone bother engaging with its eight-hundred pages of nearly impenetrable prose today? I think so. In fact, I believe that the Critique’s insights into self, society and struggle all remain to be discovered and digested, in a world where its lessons are more vital than ever. What follows is a brief tour of the book’s main landmarks, which will hopefully help more readers explore this unfamiliar continent of Sartrean thought.

This entry was posted in Jean-Paul Sartre, Uncategorized. Bookmark the permalink.