Outside Territory in Paris

The conference of Ruti Sela and Mayaan Amir’s ‘Exterritory‘ project in Paris was a really interesting event. Sponsored by the Kadist Foundation and the Evens Foundation, it was held in a remarkable space – Le Comptoir Général. As the rain came

down, it was somehow directed into channels to water the plants in the room which were growing through holes in the floor. A strange soundtrack to the bi-lingual event. I saw a mouse run between the plants at one point. I delivered a short version of a paper that is largely on Shakespeare, exile, externality and territory. I concentrated on Coriolanus and The Tempest, with some remarks on Titus Andronicus and As You Like It. I cut almost all the discussion of Richard II for time reasons.

I confess I found the technical set-up hard to work with – handheld microphones, an interpreter facing you and speaking into another microphone rather than in an isolation booth, stage lights and an unfamiliar setup for the powerpoint. I usually try to read off the reactions of the audience, but I found this tricky because the lights made it hard to see far into the audience, and because there was a slight timelag between my speaking and most 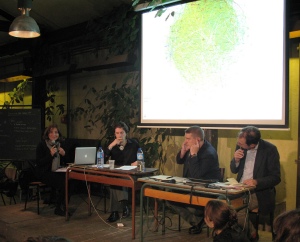 people hearing in French. I think I muddled through okay, but it wasn’t my finest performance. It made me realise how comfortable I am with the standard academic conference/lecture set-up, and how privileged I am to be able to speak in English across the world. The other papers were fascinating – Laurent Jeanpierre, Dana Dimenescu and Angus Cameron. Anat Ben-David gave a brief talk about her work and expertly moderated the event, with interventions from Ruti and Maayan. All the talks opened up as many questions as they answered, and I’ll look forward to the book from this an other linked events to come. The event was filmed and should appear online at some point. Angus offers some more detailed thoughts here, and there are more photos here. Many thanks to everyone involved.

4 Responses to Outside Territory in Paris