Susan and I spent the last few days cycling one of the coast-to-coast routes – from Walney Island in the Irish Sea to the point in Sunderland where the Wear reaches the North Sea (details here). We did some preparation beforehand – both bikes had been serviced, and we had spare inner tubes, small repair kit, etc. As I cycle much more than Susan I was carrying our stuff in panniers.

We cycled to Durham train station to get the train to the start. Durham-Newcastle, Newcastle-Carlisle, Carlisle-Lancaster, Lancaster-Barrow-in-Furness. Taking bikes on trains ought to be a lot easier than this. We are doing it for a holiday, but lots of people do this to commute. Staff were friendly enough, but spaces are very limited or non-existent and they do get in the way. 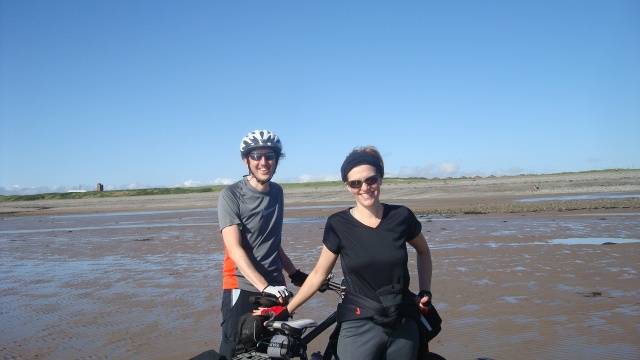 When we arrived in Barrow-in-Furness we were about two miles from the start on Walney Island, and the B&B we were staying in was a further mile out of town along the route. In part to make an early start, instead of having to double back, we cycled down to the sea, dipped our wheels in the water, and back out to the B&B that evening. We’d been watching the weather forecast and there was very heavy rain coming in around lunchtime so we wanted to make an early start the next day.

We started about 8.30am, and made good progress to Ulverston, Cartmel and Grange-over-Sands. This is just south of the Lake District National Park, and hilly, so we climbed and then descended most of the day, including back down to sea level three times. At Grange-over-Sands we had lunch quickly as the rain was starting, and changed into rain gear. The rain became really heavy, and we missed a right turn just before Witherslack, and ended up a bit lost. (The Sustrans map we had with us had detailed map of Kendal printed right on top of the area we were in—it’s a route map rather than an area map, and we were off the route, but this wasn’t very helpful.) While we were able to find our way to the place we were staying at Natland near Kendal, the detour added a few miles onto the route. And they were very hilly ones, taking us up to Underbarrow and then though Kendal instead of just to the south of it.

By the time we arrived we were soaked. The camera got damp and took a few days to dry out. One of the least pleasant parts of the ride was the liquified cow and sheep shit on the roads that flew up as a spray. Fortunately Sue at the West Barn B&B was really kind, washing and drying our clothes and really taking care of us. Despite only being a mile off the route, she’s not had any cyclists stay before. Highly recommended – the place was lovely and the food absolutely wonderful.

It was raining again the next morning, but we wanted to get going, so we started just after 9am. Lots more climbing, but fewer descents. After Beck Foot we were cycling past Howgill Fells in the Yorkshire Dales National Park. This should have had some of the best views, but visibility was very poor with low clouds. Just as the rain stopped, we had to slow down to pass a farmer who was cutting his hedges with a tractor. The road was strewn with debris, including thorns, and just after we got onto the A685 for a stretch before Tebay Susan had a flat tyre.

I got the tyre off and switched the inner tube for the spare. But I couldn’t get any air into the tyre at all—as soon as air went in, it went out. There was something wrong with the valve. My spare tube had a Schrader valve rather than Susan’s Presta, but the hole in her wheel was too small to take it. So I patched the first tube. We could get air into this, but not much, no matter how we pumped. The small hand pump was proving completely useless, partly because when the tip was reversed for the Presta valve it wasn’t forming a good seal. Despite being on the coast-to-coast route, we didn’t see any cyclists for a while, so in the end were forced to call a taxi. There were no bike shops in the nearby towns, so Susan went back to Kendal to get a new pump and some spare tubes while I waited with the bikes. No sooner had we got a taxi on its way that a police car stopped to see if they could help (he couldn’t, but confirmed the pump was useless), and we saw some cyclists. It was well past lunchtime by this point, so once fixed we went on to Orton to get some food. We wanted to get going again quite quickly, but on leaving the pub discovered Susan’s other tyre was now flat, again from thorns. With a decent pump we fixed this quite quickly, only to have another flat on her bike to fix about five miles down the road. We got to Kirkby Stephen much later than we’d hoped, and it was a long way until the next place to stay, so we called it a night.

The first eleven miles were all uphill, to the highest point on the ride at the Tan Hill Inn on Stonesdale Moor. The next couple of miles were easy downhill, but then we had to turn off the main road onto an unsealed road. I found this really tough going, with the heavily-laden bike hard to manoeuvre at speed through the potholes and across the stones and gravel. The bike was taking a real battering on this.

Around Sleighholme Farm my back tyre went with a loud bang. I switched the inner tube okay, but the tyre wall was burst with the tube clearly visible. We used plastic tape to seal it as best we could, and kept the tyre very lightly inflated so as not to burst again, and struggled on to Bowes. Bowes felt like a ghost town—the pub only opened in the evenings or for pre-bookings; the post office was shut; there were no shops that we found. We did see a cyclist who suggested calling Spitfire Cycles in nearby (7 miles) Barnard Castle. They were really helpful, and actually drove out to us with a new tyre which was quickly fitted. He recommended a really nice place in Barnard Castle for lunch—The Nest—which is also a gallery and studio.

At Barnard Castle the route splits, with a northern branch through Hamsterley Forest, and a less hilly southern one through Bishop Auckland. We took the southern one, and reached Bishop around 5pm. We’d done quite a lot of miles already but Bishop is only about 10 miles from our home, so we didn’t feel like staying that close. We carried on to the outskirts of Durham, but the rain was starting again, and we had to stop for another flat on Susan’s bike, so at Brandon I left Susan with her bike and the panniers in a pub and cycled home to pick her up in the car. I knew I’d be faster that way, and we’d pick up the route the next day.

An easy last day – back out to the route near Durham, and across to Sunderland. The route ends on a path at the edge of the shore, but we went down to the water, and then out to a lighthouse at the end of the pier.

We got the train back to Durham, and I cycled home to get the car. Last job – giving the bikes a really good clean.

This entry was posted in Cycling, Travel. Bookmark the permalink.