Posted on November 5, 2014 by stuartelden 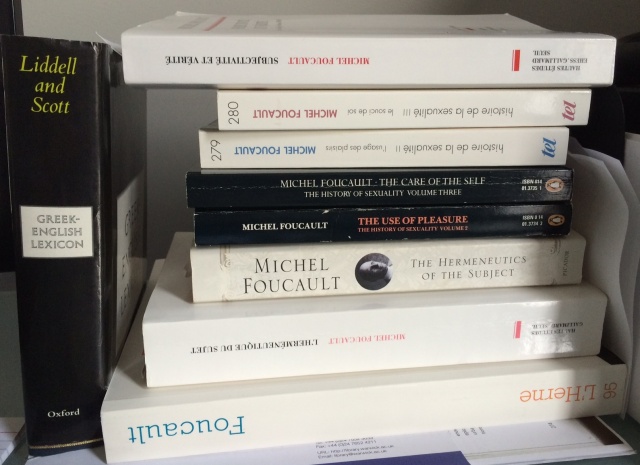 It’s been two months since the last update on this book. I’ve been working, in and around lots of other things, on the manuscript, though more slowly than I’d hoped. I finished and published my review of On the Government of the Living and Wrong Doing, Truth Telling for Berfrois – available open access here. This makes use of some of the work in Chapter Seven. I also had a long review essay on La société punitive accepted by Historical Materialism (preprint available here). I had previously written a short review on this course for Berfrois, but the Historical Materialism piece is a longer discussion based on lectures I gave in Melbourne earlier this year. I’m planning to include a much shorter discussion of this course in Chapter One as a result, alongside Lectures on the Will to Know and Théories et institutions pénales (due for publication in 2015).

With the publication of the English translation of On the Government of the Living course I also went back through Chapter Seven putting in the dual page references and modifying a few of my earlier translations.

I’ve also begun work on Chapter Eight, which starts with with the 1981 course Subjectivité et vérité, and will move onto 1982’s Hermeneutic of the Subject. It will also say a bit about the 1982 seminars at the University of Vermont, published as the book Technologies of the Self. The plan is that the second half of the chapter discusses the second and third volumes of the History of Sexuality. For the moment I’ve been working on Subjectivité et vérité alone, especially the reading of Artemidorus’ Onirocritica. While a discussion of that text forms the basis of the first few chapters of The Care of the Self, I think there are some interesting differences. I’m finding the course challenging, not least because the Greek is transliterated, so if I want to look words up I’m frequently transliterating them back into Greek in order to find them in a lexicon.

I’ll be lecturing on Subjectivité et vérité in the context of the wider project next week at the Nottingham Contemporary gallery – details here. This gives me a non-negotiable deadline to work to for that course. I’m hoping to finish Chapter Eight by the end of term, and then hopefully drafting Chapter Nine over the Christmas period.

You can read more about the Foucault’s Last Decade project, along with links to previous updates, here.