Foucault’s Last Decade – Update 21: a second book on The Birth of Power 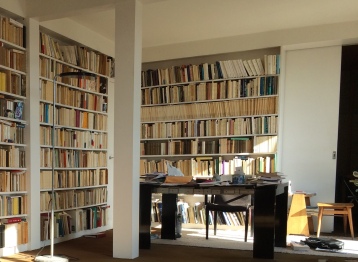 There have been some major changes to the project since the last update. I’ve held back this post until the situation was clearer. When I initially proposed the Foucault’s Last Decade book to Polity, it was to have an opening chapter entitled “Introducing Power”. The idea was that this would treat “the early 1970s, tracing the theme of power in Foucault’s work, and showing how this led to his book Discipline and Punish in 1975”. That would set up the analysis of the rest of the book. In writing this, it became too long for a single chapter, and became two. But each of those chapters was very long, and there were substantial things still to do in the first. This was partly as a result of two early lecture courses at the Collège de France not being available when I was first working on the book, but now I have these, it was again expanding. Lots of the work I did on Discipline and Punish was left in a separate file, along with my notes on why we needed a new translation. As a result, the overall Foucault’s Last Decade manuscript was, as I’ve said before, much too long.

I hoped I could work on the whole manuscript and leave Melbourne at the end of March with something close to the final version. But while I was able to make some cuts, I was also making additions, and I came to realise that there was no way that I could deliver this whole project to anything close to contracted word-length. In discussion with the publisher we decided that I should cut all the pre-1974 material from Foucault’s Last Decade. This would mean a book that was much closer to its title, which traces the emergence, transformation and enforced end of the History of Sexuality project in all its forms and detours. So the first two chapters were removed. I’ve now written a much shorter introduction to the Last Decade book, and now have a complete draft in good order at just about the right word length. A little more work is needed, but I think it’s very nearly there.

This left me with a lot of unused material. I therefore wrote a proposal for a book that would treat the period from 1969 to 1974 in much more detail. Polity were able to get reader reports on the proposal quite quickly, which were very positive. Yesterday I heard that the book had been discussed in an editorial meeting, and that they will offer me a contract for a book under the title Foucault: The Birth of Power.

This second book will discuss the first three lecture courses at the Collège, which develop the ideas of Measure, Inquiry and Examination; and the three applications of this work to the topics of Madness, Discipline and Illness. The first three courses are Lectures on the Will to Know, the soon-to-be-published Théories et institutions pénales, and La société punitive (you can read my review at Berfrois; and I have a review essay forthcoming). What I’m calling the applications would encompass Foucault’s rethinking of elements of the History of Madness in the Psychiatric Power course; the collaborative projects on public health, disease control and hospital architecture; and of course the work that led to Discipline and Punish. The book will also look at his activist work on asylums, health (especially abortion rights), and, naturally, prisons. While the prisons work is very interesting, I think there is a lot to be said about the other work that has been rather neglected. We tend to know much more about the Groupe d’information sur les prisons, but much less about the Groupe Information Santé and Group Information Asiles. Part of this is due to the archival work of Philippe Artières and colleagues on the prisons group; part due to less direct involvement by Foucault, though his links with the Santé group are especially interesting. I’ve begun some digging around and I’m finding some interesting material in pamphlets, journals and newspapers. There is much more, I’m sure, to uncover.

Here’s the draft table of contents for this second book:

The two books on Foucault will work as standalone studies, rather than as Volume I and Volume II. But they can also be read in sequence – one on the History of Sexuality project, and one on the period immediately preceding it, with all the conceptual, historical and activist work on these topics, of which Discipline and Punish is the key, but by no means the only, expression.

I had hoped that I was close to finishing work on Foucault. While I have a lot of material for this new book already, it will take quite a while to research and write the new parts. I want to dig deeper into some lesser-known texts and do some more archival work to do this properly. Nonetheless I hope that I can complete this work so that the two books can appear in fairly close proximity. The work on Shakespeare and geophysics/geopolitics, both of which remain future projects, will have to be shifted a bit further into the future, with the exception of talks on Richard II and ‘earth’ to which I am already committed.

As well as this structural reorganisation I’ve also been working hard on the content. I recently spent a few days in Paris to do some work in the Bibliothèque Nationale, and while there I met up with Daniel Defert to talk about a few things. I’ve met him several times at conferences, but this was the first time we’d had a one-to-one conversation. It was also the first time I’d visited Foucault’s old apartment on the rue de Vaugirard. He is extremely nice and supportive, and has been ever since I first met him in 1999 as a very nervous PhD student at a conference on Foucault and medicine in Caen. He was able to answer many questions and provided some very useful information which I will make use of for the book. At the BNF I was interested to look at early draft material for and the manuscript of the second and third volumes of the History of Sexuality. This manuscript, together with an early draft of the Archaeology of Knowledge, has been available for over two decades but seems to be rarely consulted.

Lots of other material is available at IMEC, which I worked through several years ago. The 37,000 pages of material that Defert recently sold to the BNF are not yet catalogued, and so not available to researchers. Defert told me that a manuscript expert and, ideally, a Foucault expert, needs to go through all the material very carefully to itemise what is there. I understand this will be advertised as a scholarship for a researcher, which sounds an amazing job. This material includes the manuscript of Volume IV of the History of Sexuality, Les aveux de la chair, but also all Foucault’s lecture and reading notes. To get an idea of what such material looks like, you can see his preparatory notes to Les mots et les choses (The Order of Things) or some of the reproductions in recent books like the Cahier L’Herne. Foucault’s handwriting is a challenge, but not an insurmountable one.

Either side of the Easter bank holidays I also spent two days in the British Library, and I’ve ordered yet more books and documents. Much of the recent work has been with newspapers – I’ve been checking out petitions Foucault signed and reports on press conferences at which he spoke. There is some relatively neglected material that sheds light on his political activism in really interesting ways. I will be going to Berkeley to do a little more archival work in early May, which I anticipate being the last work before submitting the Last Decade manuscript. While I want to finish one book before I dive headlong into the other, I’m trying to make the most of visits to libraries and archives. I’ll be based in London later this year, and know I can be back to Paris either this summer or autumn. To undertake the work for The Birth of Power will require at least one visit to the IMEC archive in Caen. As mentioned above I did some work with their collection several years ago, which proved invaluable for the Last Decade book, but that was before the archive moved out of Paris. I visited its new location at the Abbey of Ardenne back in the late 1990s, when it was being rebuilt. I’m looking forward to visiting again.

So, while Foucault’s Last Decade is almost complete; I’ll be continuing with updates for a while yet as my focus shifts to the earlier period for The Birth of Power. You can read more about this project – these projects – along with links to previous updates, here.

3 Responses to Foucault’s Last Decade – Update 21: a second book on The Birth of Power