An English translation of Deleuze’s first seminar from 1956-57, What is grounding? is available to download. The book is open access, and just needs an email address to receive the download link. A French version is online here. 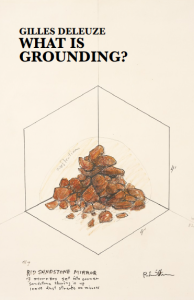 What is Grounding? is Gilles Deleuze’s first seminar, and is distinguished in that, rather than “taking an author from behind and giving him a child that would be his offspring, yet monstrous”, the work focuses instead on the question of grounding, defined both as “the sufficient reason for concrete entities”, and “the point of departure for philosophy”, in translator Arjen Kleinherenbrink’s terms. Rather than foregrounding method, in which human subjective experience remains primary, here Deleuze affirms the centrality of system, of things and the relations between things.

“Nothing less than the ur-text for Deleuze’s pre-1970s philosophy, an original sketch of his main themes and problems, which are all present in intensely compacted form” – Christian Kerslake (Radical Philosophy).

This entry was posted in Gilles Deleuze. Bookmark the permalink.

1 Response to English translation of Deleuze’s first seminar (1956-57): What is grounding? – open-access e-book