What would Shakespeare do about Europe’s migrants?

“What would Shakespeare do about Europe’s migrants?” in The Economist. 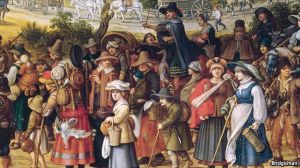 FOR months Sir Ian McKellen has been treating various audiences (including Marc Maron, a comedian and podcast host, and the Savannah Film Festival) to a monologue from a minor Elizabethan play entitled “Sir Thomas More”. It was written in the 1590s by two moderately successful playwrights and later revised by several others. It is notable mainly because one of the revisers (the one scholars refer to as “Hand D” in the original manuscript, in the British Library) is believed to have been William Shakespeare. Presuming the attribution is correct, the folio is the only surviving example of text in Shakespeare’s own handwriting. Sir Ian has been reciting it not just because of who wrote it, but because of what he wrote. Hand D’s contribution to “Sir Thomas More” consists of a powerful scene in which More rebukes a xenophobic London crowd for trying to drive out a group of refugees—a strangely apt 16th-century touchstone for Europe’s current migrant crisis. [continues here]

Thanks to various friends for alerting me to this. While exile and banishment are major themes in several Shakespeare plays, they tend to about the treatment of individuals, usually elite ones – for example in Richard II when the feuding noblemen Bolingbroke and Mowbray are exiled by the king: ‘we banish you our territories’. I’ve not focused on groups in that position. One to think about further, perhaps….

This entry was posted in Shakespearean Territories, William Shakespeare. Bookmark the permalink.