Over the past several years I’ve been working with Sage on a Society and Space book series, which is linked to the Environment and Planning D: Society and Space journal (now published by Sage). There are several books under contract or in discussion, with the first two volumes due to be published very soon. The series description is as follows:

The Society and Space series explores the fascinating relationship between the spatial and the social. Each title draws on a range of modern and historical theories to offer important insights into the key cultural and political topics of our times, including migration, globalisation, race, gender, sexuality and technology. These stimulating and provocative books combine high intellectual standards with contemporary appeal for students of politics, international relations, sociology, philosophy, and human geography. 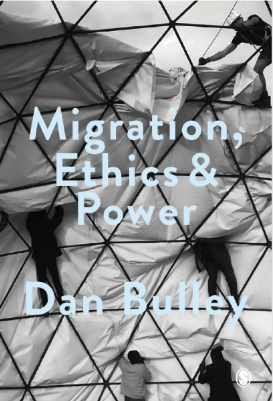 The first book to be published will be Dan Bulley’s  Migration, Ethics and Power: Spaces Of Hospitality In International Politics. The book’s description is:

In 2014, the ethics and politics of hospitality were brought into stark relief. Three years into the Syrian conflict, which had already created nearly 2.5 million refugees and internally displaced 6.5 million, the UN called on industrialised countries to share the burden of offering hospitality through a fixed quota system. The UK opted out of the system whilst hailing their acceptance of a moral responsibility by welcoming only 500 of the ‘most vulnerable’ Syrians. Given the state’s exclusionary character, what opportunities do other spaces in international politics offer by way of hospitality to migrants and refugees?

Hospitality can take many different forms and have many diverse purposes. But wherever it occurs, the boundaries that enable it and make it possible are both created and unsettled via exercises of power and their resistance. Through modern examples including refugee camps, global cities, postcolonial states and Europe, as well as analysis of Derridean and Foucauldian concepts, Migration, Ethics and Power explores:

This is a brilliantly contemporary text for students of politics, international relations and political geography. 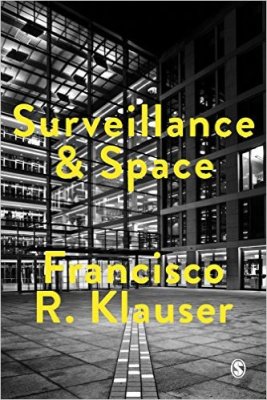 Dan’s book will be closely followed by Francisco Klauser’s Surveillance and Space:

The digital age is also a surveillance age. Today, computerized systems protect and manage our everyday life; the increasing number of surveillance cameras in public places, the computerized loyalty systems of the retail sector, geo-localized smart-phone applications, or smart traffic and navigation systems. Surveillance is nothing fundamentally new, and yet more and more questions are being asked:

Who monitors whom, and how and why?

How do surveillance techniques affect socio-spatial practices and relationships?

How do they shape the fabrics of our cities, our mobilities, the spaces of the everyday?

And what are the implications in terms of border control and the exercise of political power?

Surveillance and Space responds to these modern questions by exploring the complex and varied interactions between surveillance and space.  In doing so, the book also advances a programmatic reflection on the very possibility of a ‘political geography of surveillance’.

Other books under contract include Marcus Doel’s Violent Geographies, Shiloh Krupar and Greig Crysler’s The Waste Complex and Ross Exo Adams’s Circulation and Urbanization. Plenty more in development and discussion. If you’d like to talk to me about the series, please email me.

This entry was posted in Books, Publishing, Society and Space, Uncategorized. Bookmark the permalink.