Hot off the press – Dan Bulley’s Migration, Ethics and Power – the first book in the Society and Space book series 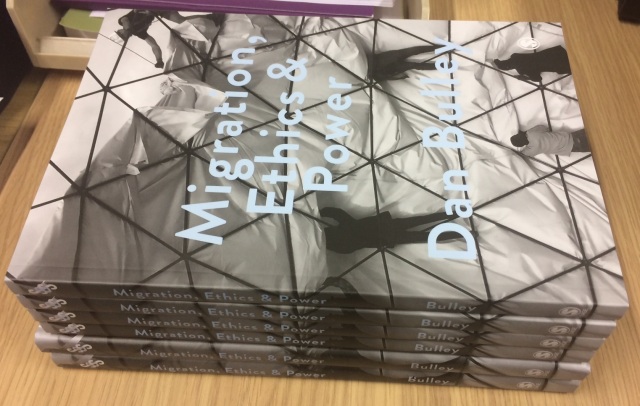 The first book in the Society and Space book series is Dan Bulley’s  Migration, Ethics and Power: Spaces Of Hospitality In International Politics. I posted about the series as a whole earlier this week, and now the editor copies of this book have arrived. It looks terrific. The book’s description is:

In 2014, the ethics and politics of hospitality were brought into stark relief. Three years into the Syrian conflict, which had already created nearly 2.5 million refugees and internally displaced 6.5 million, the UN called on industrialised countries to share the burden of offering hospitality through a fixed quota system. The UK opted out of the system whilst hailing their acceptance of a moral responsibility by welcoming only 500 of the ‘most vulnerable’ Syrians. Given the state’s exclusionary character, what opportunities do other spaces in international politics offer by way of hospitality to migrants and refugees?

Hospitality can take many different forms and have many diverse purposes. But wherever it occurs, the boundaries that enable it and make it possible are both created and unsettled via exercises of power and their resistance. Through modern examples including refugee camps, global cities, postcolonial states and Europe, as well as analysis of Derridean and Foucauldian concepts, Migration, Ethics and Power explores:

This is a brilliantly contemporary text for students of politics, international relations and political geography.