The Early Foucault update 9: from Shakespeare back to Foucault and Canguilhem 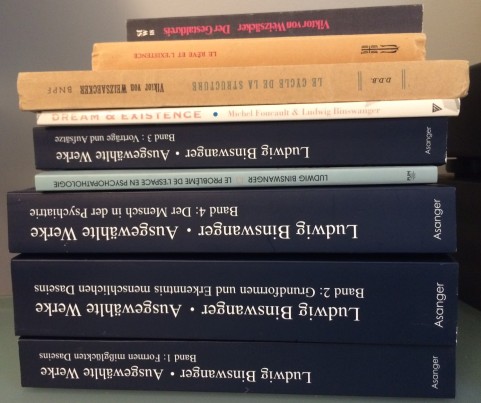 I’ve spent most of the first half of the summer revising my Shakespeare manuscript, which is now resubmitted. But I have been doing a little work on the early Foucault in the meantime, and on Canguilhem. With the latter, much of the work has been reference checking from the extensive notes I took on his work while I was in Amsterdam. Canguilhem references a lot of historical texts in biology and medicine, and I wanted to check all of his quotations at a minimum. I discussed some of the reasons why this was important, and challenging, here. Some of this work was done in Paris, and also at various libraries in London – the British Library, Senate House and the Wellcome Trust.

The reason I was in Paris was for another short visit to the Bibliothèque Nationale, where I worked through some more boxes of Foucault material. These concerned some thematically organized boxes of lectures and manuscripts on art, literature, criminology and madness. Some of the texts here have been published in the last several years; others are planned for the future. Only a few relate to the period I’m currently working on, but it’s clear that Foucault wrote quite a lot which he didn’t publish, and not all of this was delivered as a lecture. There are carefully written, and sometimes typed, texts, which it seems just were left to gather dust.

On the final day of this trip I made an initial survey of a box of materials relating to his early lecture courses at Lille. There are plans to publish at least one course from this period. Jacques Lagrange’s student notes are archived at IMEC, and there are some discussions of this material in works by Elisabetta Basso and Philippe Sabot, among others. Some of these courses were repeated at the ENS in Paris. I’ll need more time with this material, though I’m also hoping that a schedule for the publication of the pre-Collège de France courses will become available soon.

While I still have a lot of research to do, and expect this to go on for more than a year, I have spent some time beginning to write up some sections. So I have the draft of a chapter on Foucault’s teachers, a section on his time in Uppsala, a bit on the intellectual side of his relationship with Barraqué, and about half a chapter on his work translating Binswanger and von Weizsäcker. Each of these will need much more work, but little bits of the book are beginning to take shape. Now for a holiday, and then when I return I hope to make a bit more progress before the summer ends.

The previous updates on this project are here; and Foucault’s Last Decade and Foucault: The Birth of Power are now both available from Polity. Several Foucault research resources such as bibliographies, short translations, textual comparisons and so on are available here. On the Canguilhem project, see this page.

2 Responses to The Early Foucault update 9: from Shakespeare back to Foucault and Canguilhem