Posted on December 2, 2017 by stuartelden

I’ve been rather preoccupied the last few days with hosting the second Territory workshop of the ICE-LAW project, of which more later. But I’ve just se 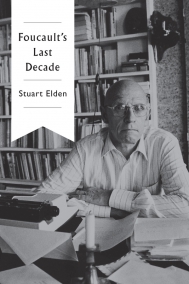 en this very nice review of my 2016 book Foucault’s Last Decade in Manchester Review of Books.

Stuart Elden – Foucault’s Last Decade (Polity).
Stuart Elden is an outstanding academic and a great writer, combining a high degree of scrupulousness in research with an accessible and assured style. Foucault always seems to arrive obscured by a fog of sensation, stories of saunas and acid trips, self-mutilation and other ‘excesses’.

But this holds a mirror up to everything else, rather than telling us much about Foucault. It tells us that we live in an age in which information will fly with spectacle and sensation or it will dive below the altitude of detection.

There is gladly none of this here and you can read The Passion of Michel Foucault by James Miller if you want that.

Elden begins with one brief paragraph of relevant biography before moving on to The Work. He tells us that in 1974 Foucault finished Discipline and Punish and on the very same day he began the History of Sexuality, Volume One. In 1984 he was dead.

In those ten years there was a huge shift, a large amount of new beginnings and, because of Foucault’s death, a lot of loose ends. Elden works meticulously and fascinatingly through these. His ability to keep such arcana within a highly engaging narrative is at times quite miraculous. [continues here]