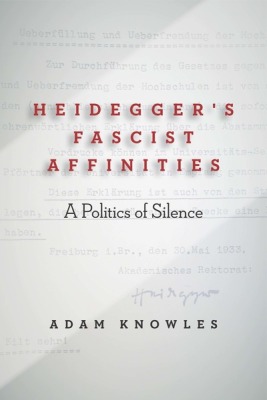 Reexamining the case of one of the most famous intellectuals to embrace fascism, this book argues that Martin Heidegger’s politics and philosophy of language emerge from a deep affinity for the ethno-nationalist and anti-Semitic politics of the Nazi movement. Himself a product of a conservative milieu, Heidegger did not have to significantly compromise his thinking to adapt it to National Socialism but only to intensify certain themes within it. Tracing the continuity of these themes in his lectures on Greek philosophy, his magnum opus, Being and Time, and the notorious Black Notebooks that have only begun to see the light of day, Heidegger’s Fascist Affinities argues that if Heidegger was able to align himself so thoroughly with Nazism, it was partly because his philosophy was predicated upon fundamental forms of silencing and exclusion. With the arrival of the Nazi revolution, Heidegger displayed—both in public and in private—a complex, protracted form of silence drawn from his philosophy of language. Avoiding the easy satisfaction of banishing Heidegger from the philosophical realm so indebted to his work, Adam Knowles asks whether what drove Heidegger to Nazism in the first place might continue to haunt the discipline. In the context of today’s burgeoning ethno-nationalist regimes, can contemporary philosophy ensure itself of its immunity?

This entry was posted in Martin Heidegger, Uncategorized. Bookmark the permalink.