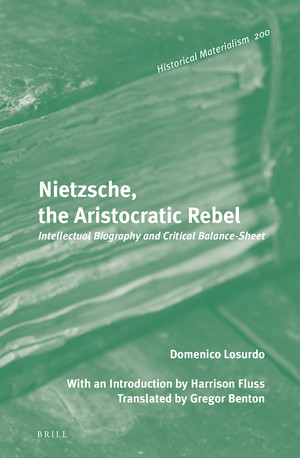 Good to see news of the forthcoming paperback publication of this major study.

Translated by Gregor Benton. With an Introduction by Harrison Fluss.

Perhaps no philosopher is more of a conundrum than Nietzsche, the solitary rebel, poet, wayfarer, anti-revolutionary Aufklärer and theorist of aristocratic radicalism. His accusers identify in his ‘superman’ the origins of Nazism, and thus issue an irrevocable condemnation; his defenders pursue a hermeneutics of innocence founded ultimately in allegory. In a work that constitutes the most important contribution to Nietzschean studies in recent decades, Domenico Losurdo instead pursues a less reductive strategy. Taking literally the ruthless implications of Nietzsche’s anti-democratic thinking – his celebration of slavery, of war and colonial expansion, and eugenics – he nevertheless refuses to treat these from the perspective of the mid-twentieth century. In doing so, he restores Nietzsche’s works to their complex nineteenth-century context, and presents a more compelling account of the importance of Nietzsche as philosopher than can be expected from his many contemporary apologists.

Update: there is a review essay in Historical Materialism.

Update 2: there is a review at Marx and Philosophy

Update 3: and a discussion at the New Books Network

This entry was posted in Friedrich Nietzsche, Uncategorized. Bookmark the permalink.