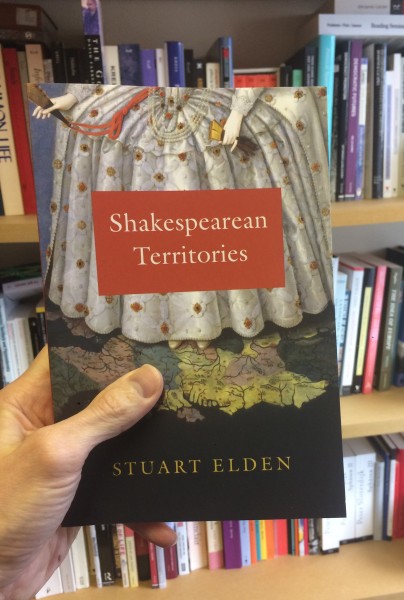 I’ve just received an advance copy of Shakespearean Territories (University of Chicago Press, 2018). The book has been a long time in production, and the final stages were delayed by paper shortages and printer problems in the US. I’ve been told that warehouse copies will follow, which usually the sign for when the book is more generally available from other sellers.

Shakespeare was an astute observer of contemporary life, culture, and politics. The emerging practice of territory as a political concept and technology did not elude his attention. In Shakespearean Territories, Stuart Elden reveals just how much Shakespeare’s unique historical position and political understanding can teach us about territory. Shakespeare dramatized a world of technological advances in measuring, navigation, cartography, and surveying, and his plays open up important ways of thinking about strategy, economy, the law, and colonialism, providing critical insight into a significant juncture in history. Shakespeare’s plays explore many territorial themes: from the division of the kingdom in King Lear, to the relations among Denmark, Norway, and Poland in Hamlet,  to questions of disputed land and the politics of banishment in Richard II. Elden traces how Shakespeare developed a nuanced understanding of the complicated concept and practice of territory and, more broadly, the political-geographical relations between people, power, and place. A meticulously researched study of over a dozen classic plays, Shakespearean Territories will provide new insights for geographers, political theorists, and Shakespearean scholars alike.

This entry was posted in Shakespearean Territories, Uncategorized, William Shakespeare. Bookmark the permalink.