Ian James, The Technique of Thought: Nancy, Laruelle, Malabou, and Stiegler after Naturalism, University of Minnesota Press, 2019 – reviewed at NDPR by Samuel Talcott

Posted on November 1, 2019 by stuartelden 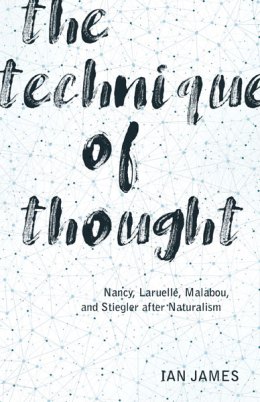 Ian James, The Technique of Thought: Nancy, Laruelle, Malabou, and Stiegler after Naturalism, University of Minnesota Press, 2019 – reviewed at NDPR by Samuel Talcott

The Technique of Thought explores the relationship between philosophy and science as articulated in the work of four contemporary French thinkers—Jean-Luc Nancy, François Laruelle, Catherine Malabou, and Bernard Stiegler. Situating their writings within both contemporary scientific debates and the philosophy of science, Ian James elaborates a philosophical naturalism that is notably distinct from the Anglo-American tradition. The naturalism James proposes also diverges decisively from the ways in which continental philosophy has previously engaged with the sciences. He explores the technical procedures and discursive methods used by each of the four thinkers as distinct “techniques of thought” that approach scientific understanding and knowledge experimentally.

Moving beyond debates about the constructed nature of scientific knowledge, The Technique of Thought argues for a strong, variably configured, and entirely novel scientific realism. By bringing together post-phenomenological perspectives concerning individual or collective consciousness and first-person qualitative experience with science’s focus on objective and third-person quantitative knowledge, James tracks the emergence of a new image of the sciences and of scientific practice.

Stripped of aspirations toward total mastery of the universe or a “grand theory of everything,” this renewed scientific worldview, along with the simultaneous reconfiguration of philosophy’s relationship to science, opens up new ways of interrogating immanent reality.